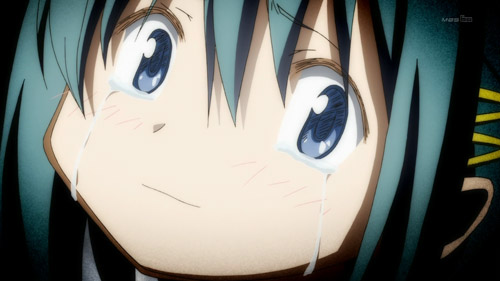 These are very hard words to say to someone for the first time. There’s always the chance that you could be rejected. If you choose to stay in the dark, you may not get the guy/girl, but at least there will still be a chance that you could have your feelings reciprocated. It remains a possibility albeit if only in your own mind. Choose to speak these words and you will be faced with the finality of an answer. The person in question will return your feelings, or they won’t. If they won’t, you will eventually have to accept that fact. In the dark, you face the fear of being rejected every day until you express your feelings; however, you also live with the hope that your love will be returned.

This dilemma is what Sayaka Miki had been dealing with since before Kamijou’s accident. When she dedicated her wish to saving his arm, she saw herself as his noble savior. She had come to the terms with the fact that he would never find out that it was her who had helped him achieve his dream. And that was perfectly okay with Sayaka. It allowed her to watch over him and enjoy his talents from afar. That is, until Hitomi appeared in the picture. Hitomi had told Sayaka to confess to Kamijou, because Hitomi liked him as well but wanted to give Sayaka the first opportunity to voice her feelings. Sayaka doesn’t take Hitomi up on it because she’s scared. Staying in the dark is safer and, just maybe, Sayaka recognizes that Kamijou’s actions point to the fact that he doesn’t love her.

Instead, Sayaka, who had once seen herself as noble, descends further and further into a dark place. This episode opens with her going crazy while killing a witch, refusing to purify herself with the grief seed, and later snapping at her best friend Madoka. This only becomes worse when she misses school, and spies on Hitomi’s seemingly successful confession. It was okay when Kamijou was with no one, but now that he’s showing feelings towards someone it’s a whole different story (similar to Kurumi’s feelings towards Kazehaya in Kimi ni Todoke). The noble thing to do, would be to adopt an attitude like Tomoyo Daidouji from Cardcaptor Sakura: Seeing the person that I love become so happy makes me happy too, and that’s enough. Sayaka takes the less saintly, and more human approach of hurt, resentment, envy, and despair. However, Sayaka isn’t human anymore. She’s a magical girl with her soul becoming more tainted by the moment.

What Sayaka forgets, as she wallows in self-hatred, is that people care about her. People like Madoka, who nearly contracts with Kyubey in order to save Sayaka. Homura literally stops time to save Madoka from becoming a magical girl. She then breaks down and shows the first emotions that she has all series. Tearfully, she tells Madoka that Madoka is worth so much more than she believes, specifically to the people who love her. It’s a lesson that Sayaka needs to hear as well, only when Kyouko tells her, it’s already too late. She’s too far gone. Predictably, beautifully, and sadly, Sayaka becomes a witch.