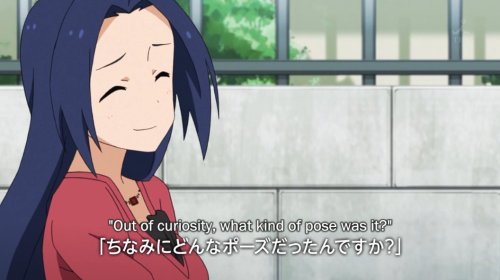 2DT:  Idols in Japan are tautologies of fame.  Sure, sometimes they sing and dance, or do seiyuu work (Apparently Nakagawa Shouko’s star ascended through the sheer digital weight of her obsessive blogging–  not a bad feat, that).  But in the end, we mustn’t forget that they’re famous because they’re famous.  They’re propelled mostly by personality, and by the dreams that those personalities sell.  I’m talking about some very lonely dreams, of course.

So the first episode of The Idolm@ster is surprisingly entertaining, but more than that it’s just very intriguing, because it takes such pains to imitate features of real idol culture.  Mainly, what I’m referring to is the invisible non-presence of the cameraman, and the silent interview process where the girls will be asked questions on-screen that they react to, but which we don’t hear.

Yi: The silent interview process is certainly the most outstanding aspect of the first episode. After all, it is rare to see this documentary style in anime. When 2DT mentioned that this is actually a common presentation in idol culture, I was eager to see it in play in a gravure DVD. After a half-hour of giggles and teasing, voila, there it is; the silent interview appears in the very last chapter. The signs from Idolm@ster are all there. The idol responds casually, though somewhat awkwardly, to seemingly no one but a mere subtitle visible only to us. She answers a series of questions that seem to have been pulled straight from a dating website:

“How would you describe your own personality?”

The questions continue with her thoughts on marriage, future goals and aspirations, her charm points… etc. It almost feels like a one-sided speed dating event, except with a more casual (though perhaps forced) atmosphere. And maybe that is precisely the point. 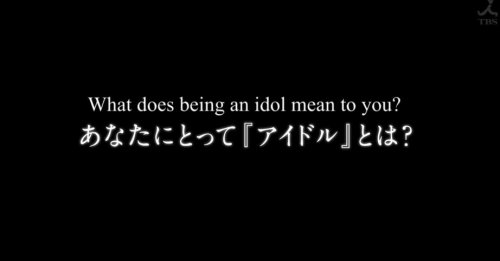 2DT: “Speed dating” is an appropriate choice of words.  :)  If you look at the history of Japanese idols, they’ve never lasted very long, and in the beginning they weren’t even especially beautiful (compared to today’s standards, at least).  So instead, the idol industry put a premium on fan devotion, the feeling among lonely males that they “know” the object of their affection.  Questions like these are meant to cultivate love.

Or, to put it in more mercenary terms:   The producers of this anime have approximately twenty-three minutes to make you want to watch more of The Idolm@ster, and in the absence of action and intrigue, their weapon of choice is fan club wars.  And it works so very well; some places already have character rankings, similar to what I remember seeing from fans of Infinite Stratos last season.

Now there’s a thought–   if this is a harem, then fame is the wishy-washy MC.

Yi: Even with the potential for fan club wars, I found the first episode extremely boring. Perhaps I was biased by having first watched a real-life gravure idol speak her obviously scripted answers, but I cannot shake the feeling that Idolm@ster girls’ lines are similarly carefully edited, and they themselves are results of manufactured personalities. (Yes, I know. This is anime; it has to be fictional.) Luckily, the first episode is not nearly as painful to sit through as the gravure movie.

Still, it felt like some lowbrow MTV “reality” show. And, much like the “stars” of those shows, none of the Idolm@ster girls made a lasting impression. How could they, when each gets only a few minutes worth of screen time, not even remotely close to the desired 15-minutes of fame? That scene when all the girls rushed at the camera at the end of the episode is especially telling. 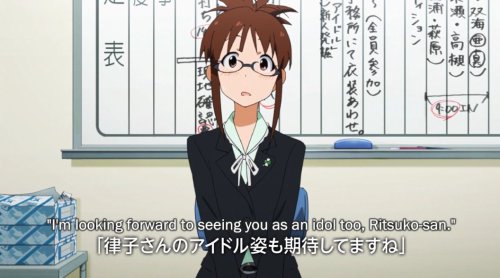 2DT: Aww, so I take it that means you won’t be watching more?  I admit at this point I’m not drawn to anyone in particular (except the female manager…  I am so easy), but something about their struggle is appealing.  The Idolm@ster is still on my radar for now.

Yi: Probably no… for now. But if The Idolm@ster somehow generates enough buzz, I will pick it up again just so that I can indulge in “celebrity gossip.”

Note: 2DT and Yi are friends of ours who were kind enough to discuss the first episode of The Idolm@ster with each other and write a colloquium for our blog.  They are both established and prolific bloggers in their own right (2DT over at 2-D Teleidoscope and Yi over at Listless Ink). We encourage you to read both of their blogs.  In addition, if you and another writer, friend, partner, etc. have a lot to say about an anime series, or just themes in a specific episode, we encourage you to contact either one or both of us to discuss future guest colloquia.

Thank you, and many thanks again to both Yi and 2DT for this excellent post!