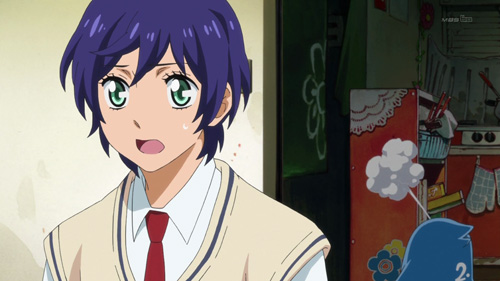 "Can you let me borrow that notebook?"

ajthefourth: Amidst the whirlwind of colors, transformations, violence, and sexual imagery that engulfs the viewer in the fifth episode of Mawaru Penguindrum, it’s easy to overlook the fact that this episode continues its subtle development of the Takakura brothers and their relationship.

Shouma Takakura is always in the background, as is his penguin.  In categorical personality traits, he is the far more feminine of the brothers.  He cooks, he cleans, he’s a bit more soft and clumsy when speaking, and his penguin reflects that; going around needlessly spraying for bugs.  His attitude is played off for comedic effect (like in the second episode where Shouma averts his eyes to the panty shot while Kanba looks on, intrigued) or dramatic effect (like in episode one where he breaks down in an emotional torrent when both of the brothers think that Himari is dead); however, if one thinks back on it, Shouma doesn’t really do much of anything.

In the above scene, Shouma is desperately racking his brain for a way to finagle the diary away from Ringo.  Without the persuasive finesse of his brother, Shouma resorts to flat-out asking Ringo if he can have her diary.  While he asks this, his penguin continues to spray for cockroaches in the background.  As he digs himself deeper and deeper into a hole, the penguin becomes more engulfed by cockroaches until, at the point where Ringo begins to fight back against him, the penguin is completely overwhelmed by insects.  Shouma’s role is a passive one, he nurtures Himari instead of protecting her, and when he tries to act, he becomes overwhelmed.  This is in striking contrast to Kanba who, without the direct help of his penguin, could not have retrieved the hat for Himari.  Kanba is shown almost entirely through actions, compounding his character development in the past few episodes: Kanba is a man who acts.  Shouma is given several other chances to act in this episode; however, they either all fall flat, or he doesn’t jump quickly enough at the opportunities he has been given. 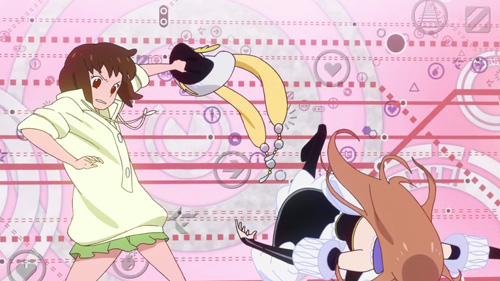 Ringo too, is seemingly a person of action.

ajthefourth: Throughout this episode, Shouma struggles to be taken seriously.  He approaches two different people regarding the penguin hat’s control over Himari and they both brush away his concerns; the doctor with patronizing words and Ringo with her fist in his face.  It’s worth noting that his attempts, though heartfelt are also awkward, clumsy, and passive.  His passive nature becomes even more obvious when he is given the opportunity to take charge when facing the penguin hat alongside Ringo.  Without Kanba present, it seemingly becomes Shouma’s turn to step into the spotlight and finally take action, but that’s hardly what happens.  Instead, Shouma whines for a few moments while Ringo takes charge of the situation, climbs up out of the same hole that Shouma usually gets dropped down every week, runs up and steals the penguin hat.  Like Kanba, she acts.

In flashbacks from the Takakura siblings’ childhood, it seems that Kanba was always the more active brother, while Shouma was the more passive one.  This mirrors our first introduction to their parents, where Mrs. Takakura is attempting to call an ambulance for the ill Himari.  Mr. Takakura steps in, hanging up the phone for her, and tells her that there’s no point.  He then acts by carrying Himari through a typhoon to the hospital.  Both brothers attempt to run out after their father and Himari; however, Shouma is held back by his mother, while Kanba catches up to and accompanies his father.

vucubcaquix: What struck me immediately during the staggered flashback scene was the exaggerated masculinity of the Takakuras’ father. He has a strong jawline, a deep brow, and forward looking eyes. Nearly every camera angle that focuses on him is from a slightly lowered perspective, emphasizing his somewhat larger than life nature. Whether or not this is an accurate characterization of Takakura Sr. or just an idealized vision of him from the perspective of the children is yet to be known.

Another interesting thing to take note of regarding the femininity and masculinity of the brothers is to see who it is that they were directly influenced by. Emily mentioned the siblings’ categorical traits above, and you see from the flashback that their personalities are the direct parallels of their parents, with Shouma taking after their mother, and Kanba taking after their father. 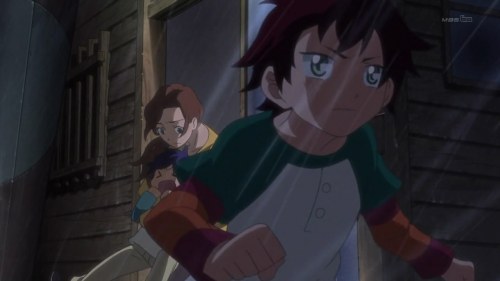 Kanba sets off to try to do something about the situation along with his father, Shouma is held back by his mother.

vucubcaquix: The similarities of the brothers to their respective parents is also reflected in their character designs. Kanba and his father have Tsurime Eyes which denote “strong will, arrogance, or pride” and is a pretty accurate description of Kanba thus far with the patronizing and dismissive attitude he takes toward his brother and to Himari. Whereas Shouma and his mother have Tareme Eyes which are the hallmarks of “a kind, quiet or otherwise soft person”.

Kanba earns his Tsurime Eyes in this episode towards the end. During the climax of the runaway truck, Shouma was once again held back from being able to affect anything in the grand scheme of things, this time due to his lack of physical conditioning as he tires himself out chasing after Himari’s tether to the living. It’s up to Kanba once again to act on the situation, being proactive enough to affect the fates of him and those that immediately surround him. Up until this climax, the characters’ penguins served mainly as comic relief without affecting the world at large beyond the trivial, such as spreading open a girl’s legs or eating a girl’s lunch, or groping a girl’s derriere on the subway.

However, something important occurred here. During the climax, Kanba was knocked unconscious momentarily. Normally that would be the  end of the scenario, but Kanba’s penguin somehow managed to hold on to the runaway truck and to his partner simultaneously ensuring the eventual success in retrieving the penguin hat. It was at this moment, for Kanba at least, where the penguins ceased to be just the reflections of their partners’ personalities, and graduated to being the extensions of their wills. This is big, and it has far reaching implications. 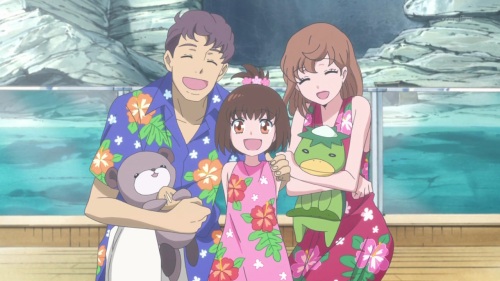 "That aquarium in Ikebukuro." The end of the line.

ajthefourth:  Another intriguing connection with far reaching implications is the growing role of the aquarium in the series.  We learn, through Ringo’s lunch date with her father, that she used to visit the exact same aquarium that the Takakura family used to visit, meaning, it’s also the location from which Himari received the mysterious penguin hat.  The aquarium is the place where the audience is first introduced to the penguins, and it’s inside the aquarium that Himari supposedly dies.  It’s hardly coincidence that the penguin hat claims to be from the destination of the Takakura brothers’ fate and the aquarium is located at the end of the Marunouchi line in Ikebukuro.  It will be interesting to see if all roads lead back to the aquarium, as it is now not only an integral part of the Takakura’s story line, but the Oginome family’s story line as well; an interesting intersection, especially when the majority of symbolism that surrounds Ringo involves the ocean or illusions of being underwater.

Familiar imagery is now apparent in the ending.

vucubcaquix: Ringo’s lunch date with her father confirmed a suspicion that I had since the ending of episode two. The icons in the ED all have some sort of significance beyond any sort of aesthetic design. The first thing one notices is the caduceus-like twin snakes that are featured on the cover of Ringo’s diary. During the lunch date when Ringo makes mention of the fact that her family all purchased matching penguin charms for their cellphones, the shot cuts to Mr. Oginome and a decidedly un-penguinlike charm. During our conversation afterward, my partner Emily called attention to the fact that the wire globe at the top of the screen had a cameo in the doctor’s office where Shouma’s penguin was haplessly caught up in it. Not to mention the appearances of the horse and frog in the previous frame making an appearance during episode 4, and the kappa in that same previous frame being featured in the Oginome family portrait at the aquarium above. What these icons mean is anyone’s guess, but their presence in the ED foreshadowing their placement in the series proper is a good thing to keep note of, as we tumble further along.

vucubcaquix: Well Emily, with another week comes another episode of Penguindrum. I only regret that we haven’t had the time to elaborate on the allusion to Gustav Klimt’s Der Kuss seeing as how this post is already leaning towards the unwieldy side.

ajthefourth: Ah, we wouldn’t want to be unwieldy would we?  Well, since Mawaru Penguindrum isn’t going to air next week, instead of taking a break, we could always dedicate an entire post to themes between the two.  Of course this episode was so dense that there are still other things that we didn’t have room to address here, weren’t there?

vucubcaquix: Not one word was spent on Natsume Masako, was there? Our speculation from last week proved to be correct, as she was indeed the one to assault Kuho Asami of the red heels. We don’t know what her deal is yet, but she’ll prove to be an interesting watch. I’m going to take you up on your idea, next time let’s talk about Gustav Klimt, his history, and the implications of alluding to him in this anime. If I’m not mistaken, you and I have some diverging opinions on the interpretation of The Kiss.

ajthefourth: Yes, it will be our first “blog argument” so to speak.  I look forward to it!  Have a good night, David.

vucubcaquix: Have a good night, Emily.