“Encore un moment!” The Role of the Comtesse Du Barry in Rose of Versailles

The Comtesse, scheming her way up the social ladder.

The story of Rose of Versailles is a well-known one (as is its influence in other successful series like Revolutionary Girl Utena), partially ripped from the scandalous and eventually bloody headlines of the French Revolution.  It follows the Lady Oscar de Jarjayes, who has been raised as a boy her entire life and rises to a prominent position as head of the French royal guard, becoming a retainer of sorts for Marie Antoinette.  The story primarily focuses on Oscar and Marie; however, ten episodes into the series, my attention was captured by another fairly prominent historical figure and character: The Comtesse duBarry.

Lady duBarry is initially presented to the viewer in a negative light.  More specifically, she’s presented through the eyes of the then Crown Princess Marie Antoinette, who wants nothing to do with the King’s favorite mistress of that time because of Lady duBarry’s notoriously humble beginnings as a prostitute.  Their feud within the French court, and Marie’s refusal to speak to her, soon becomes such a big scandal that Marie is forced to address her in public, which, in the series, Lady duBarry counts as her significant victory over the Crown Princess.  Rose of Versailles presents this feud to the viewer more from Marie’s perspective than the Comtesse’s, to the point that I too felt upset when Marie was forced to address Lady duBarry. 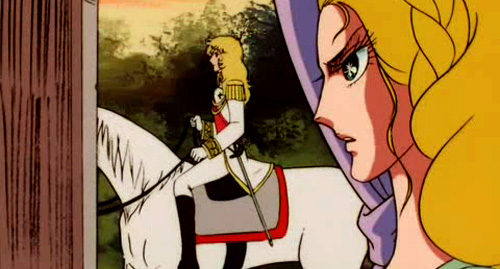 “I was craving for diamonds and dresses one after another, as if I starved for them.”

In retrospect, both women come out looking rather petty, although Lady duBarry stoops to more drastic and harmful measures to ensure her influence, like poisoning and writing false, scandalous letters.  Things take a turn for Lady duBarry when her consort and then current ruler of France, King Louis XV, falls ill with smallpox and dies.  Without the King’s backing, Lady duBarry is swiftly exiled from court as Louis XVI and Marie Antoinette’s reign begins.  Whether out of sympathy or duty, Oscar insists on escorting Lady duBarry’s carriage from court and ends up listening to the Comtesse’s perspective on a few things, most specifically her earlier struggles in life and how, once she came to court, she was consumed with gaining more power and material items.

Lady duBarry’s final conversation with Oscar is what stuck in my mind as a viewer, and did wonders for not only her own character, but for the characterization of women throughout this series.  For Oscar, a character who will later (in spite of her own attachment to Marie) find herself siding with the revolutionaries, it’s interesting to note how this conversation could mark a significant turning point in her thought processes earlier than one would expect (although you do see her speak out against the court a few times prior to this as well). During their conversation, Lady duBarry remarks that Oscar has more than likely never had to feel unsure about where her next meal is coming from.  At this point in the series, Oscar is still young and rather quick to judge between right and wrong  She had sided with Marie easily during their power struggle in court, presumably due to her own disapproval of Lady duBarry’s former occupation.  Following their conversation in episode nine, the viewer begins to see Oscar soften a bit on certain things, and harden her heart towards others.

This series also allows the viewer to compare and contrast Marie and the Comtesse’s experiences in spite of their drastically different upbringings.  Marie was a young girl forced into a marriage in order to further ensure trust between France and Austria.  Her mother, before marrying her off, expresses that she shouldn’t let her capricious and thoughtless nature get the best of her.  However, through her interactions with Lady duBarry, Marie seems to solidify these more contrary parts of her nature instead of attempting to overcome them.  The two women parallel each other often, with each of them trying to maintain their sometimes tenuous grasp of juggling many influences at once.  In addition to this, Louis XV is posthumously criticized by the public for spending an extravagant amount of money on Lady duBarry specifically instead of on improving the quality of life for his subjects.  This complaint is also leveled at Louis XVI and Marie later on when the populace’s discontent finally reaches the boiling point that sparks the French Revolution.

“Roses, roses, they bloom in dignity.”

Comtesse duBarry isn’t in the series for long; however, her influence and her plight are reflected in the development of many other female characters in the series.  Putting her more concrete influence from the diamond necklace affair aside, her words become especially significant while watching the plights of Rosalie Lamorlière and her “sister” Jeanne Valois as they both try to improve upon their low stations in life.  The above image is of Lady Oscar de Jarjayes, but it seems to me that it could represent many of the women presented in this series, doing all they can to struggle against the influences that ensnare them, drawing them ever closer to their respective bloody ends.

18 responses to ““Encore un moment!” The Role of the Comtesse Du Barry in Rose of Versailles”