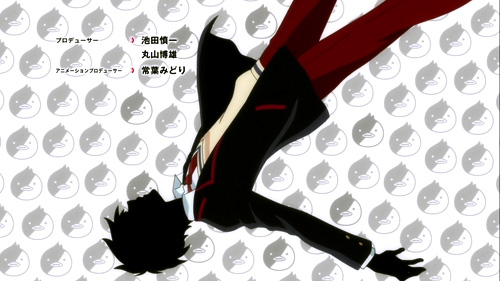 ajthefourth: It was in episode five, when their parents were introduced, that the Takakura brothers really began to cement themselves as separate entities in viewers’ minds.  Kanba was the more active one.  He took after his father, who was also a man of action.  Shouma, on the other hand, took after his mother.  He was more domestic, emotionally messy, and a bit of a worrywart.  In this episode, Shouma takes action, although hardly in the same way as his brother would have. 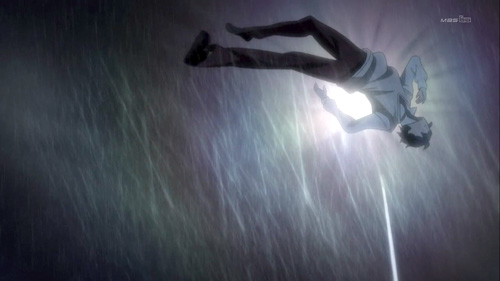 In the past, whenever Shouma has been discussed, it has been in regards to his uselessness, especially in comparison to his more competent, reliable, and attractive brother. However, signs had pointed to Shouma’s role beginning to take a more significant turn within the plot, especially in last week’s episode when his penguin finally had a concrete impact on the series’s proceedings when it immediately wolfed down the eggs that a mystical frog had laid on Shouma’s back.  This marked the first time in the series that Shouma’s penguin had a direct effect on what was happening in the plot instead of spraying for insects (metaphorical or otherwise) or being the culprit behind a mysteriously vanishing lunch.

I love episode eight as a character study for Shouma, especially in contrast to his brother, who has been more absent in these past few episodes.  As mentioned before, Shouma is someone who is emotionally expressive, and seemingly unable to understand when others suppress their emotions.  This is especially true to his character when he calls Ringo’s bluff in this now-infamous bedroom scene where she effectively tries to rape Tabuki. 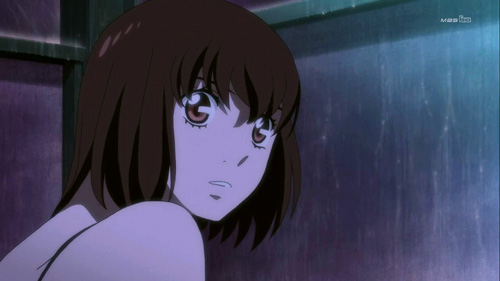 "It wasn't what you wanted to do."

When he says the above line to Ringo, a part of Shouma’s character is fully revealed: he’s grown to care about Ringo.  This may seem obvious; however, it doesn’t make it any less important. (As an aside, I also get the feeling that we’re learning more and more about Shouma precisely because Ringo has been growing more fond of him herself.)  Kanba would have never worried about Ringo’s emotional instability, he would have taken the diary already and presented it to the Princess/Penguinhat in order to discover if it was the famed penguindrum or not (unless he’s just another Touga Kiryuu or Tokio Tsunashi and buying time).  Shouma, on the other hand, decided to try and save Ringo’s life, twice in the same episode, no less.  When Shouma decides to take action it is less focused, and perhaps more emotionally messy, but just as effective if not more so.

vucub caquix: It has come to my attention through the conversations that we have had, that occasionally we have a bit of a different perspective on Mawaru Penguindrum.  Where others have focused on the plot and proceedings of each episode, we tend to be attracted to the symbolism, and characterization involved.

While my partner, Emily, noted that the diverging paths of the Takakura brothers were beginning to cement in episode five, the foreshadowing of this has been in place since the very first episode.  Through the meal that the siblings first shared, as they sat down, Kanba and Himari remarked on Shouma’s domestic abilities, which included all of the aforementioned connotations attached to them.  It was in this same episode that the themes of determinism and existentialism were being obliquely laid down for the audience.  I theorized that the main narrative push of the series was going to be the conflict between determinism and existentialism; specifically, that the show has a very deterministic universe, whereas the characters (minus Ringo) have very existentialist attitudes.  While much hasn’t been made of it since then, Kanba’s symbolic first strike against the determinism in this universe was his kiss on a sleeping Himari.  Seemingly, Shouma’s equivalent first strike was his successful attempt to prevent Ringo from fulfilling her so-called destiny that was laid out in her deceased sister’s diary, the proverbial Project M.

The universe has struck back against Shouma’s existential actions by playing on his selfless nature as he pushed Ringo out of the way of an oncoming car.  If it wasn’t for Shouma’s presence, there’s a very real chance that Ringo could have successfully enacted her interpretation of Project M thus, acting as the universe’s lymphocyte, the car attempts to remove Shouma from the equation.

I am of the opinion, that the reason why the universe has not acted against Kanba thus far, is that the brothers are fated to have opposing roles; one, the active, and one, the passive.  There hasn’t been an overt action on the part of the universe against Kanba, but there has been one against Shouma, precisely because he has stepped out of his predetermined role as the passive brother.  We would not have noticed this if we hadn’t been paying particular attention to the characterization of the brothers from the beginning. 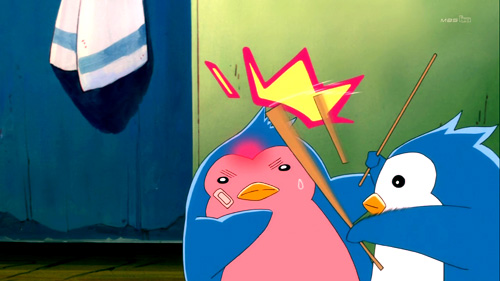 "What about you? What have you been doing this entire time?"

ajthefourth: The characters in this series are key.  Although we haven’t learned nearly everything it’s becoming apparent that, for the majority of this first cour, Mawaru Penguindrum is going to be more of a study in characterization as opposed to being more plot-driven.  Personally, I really like this idea, especially when you consider the small references in the series to the Sarin Gas Attacks.  If the series is a study on the after-effects of the gas attacks on the populace (and I am well-aware that this is a big “if”) then one of the strongest ways to go about this would be to establish interesting, multi-faceted characters first and then follow it up by introducing the specter of the gas attacks hanging over the series, much like the specters that were placed at the top of Penguindrum‘s interpretation of Gustav Klimt’s “The Kiss.”

This focus on characterization is especially apparent in the developing relationship between Ringo and Shouma, which admittedly I have found very engaging.  Ringo, although I had previously argued to see less of her and more of Himari, has become the most entertaining, tragic character in the series thus far.  Her imposition of the moray eel into the delusions of the destruction of her family is a perfect example; moray eels are typically thought of as volatile, when in actuality they’re rather shy and reserved.  In this latest episode Ringo sees her father with a new woman, a new daughter, and a new life.  Previously her father was seemingly Ringo’s only defender when she was younger (to her own mother no less) so she can’t help but impose the moray eel image on these two, and it kicks her warped mind into overdrive.  If the series is trying to paint a portrait of how a large-scale tragedy can warp one’s mind so soundly, in spite of the fact that she had never known the person directly affected, her dead sister, Ringo is the perfect (and far more personal) example.

vucub caquix: For all of the attention that we pay to the Takakura siblings one can forget that Ringo’s character is completely submerged in irony.  She has the most deterministic mindset coupled with the most existential actions.  If the series continues to use Ringo as an example of the negative effects of the 1995 Sarin Gas Attacks through the death of her older sister in said attacks, that will only serve to heighten the irony surrounding her character even more.

I say this because I read an interesting theory about the relationship between Ringo’s sister Momoka and the wild card that is Masako Natsume.  The theory goes that Masako may be the reincarnation of Ringo’s sister Momoka.  There are many small things that support this, such as a few extraneous details that were read from the diary describing situations that Masako was in.  For example, the diary mentions a girl in red heels; Ringo never actually came across her, but Masako assaulted her.  We had previously speculated on the connection between the diary and Masako, but having Masako know and specifically refer to Project M only further entrenches this idea in my mind.  There’s a lot of other circumstantial evidence that supports this assertion as well: Masako’s apparent age being similar to that of Tabuki, and having a penguin of her own.  The only entities in the universe that have been shown to have the power of resurrection are the penguins; therefore Masako’s association with the penguin faction may hint at the idea that she could have been resurrected or possibly “saved from her fate.”  There is also the fact that Momoka’s name means peach, which in Asian tradition is a symbol for immortality.  The irony involving Ringo’s character is that, if Masako is indeed Momoka, by attempting to fulfill the words in her dead sister’s diary, Ringo may be inadvertently in direct conflict with her sister (Masako) who is still alive.

At the end of this episode, after Ringo has been thwarted by Shouma a supposedly unrevealed character swept in and attempted to steal the diary away.  The show doesn’t explicitly state who this character is, but I don’t think that it’s a large logical leap to say that this was Masako.  Ringo has made it a point to be secretive about her diary.  I was under the mistaken impression that she was more of an evangelist regarding its powers and the idea of it.  Through the revelation of her protectiveness of the diary, one can assume that she is the only living person outside of the Takakuras who knows of this diary’s existence. Who else could possibly know about the existence of a diary that supposedly has the fates of the characters written within?

ajthefourth AND vucub caquix:  Our apologies for the lapse in a Penguindrum post last week; however, circumstances arose in both of our daily lives that needed attending to, David with school and work, and Emily at her job as well.  We (hopefully) made up for it by watching this episode together (as in, not 541 miles from each other over Skype) while eating Ringo’s curry.  You can find the recipe here, courtesy of Baka Laureate. 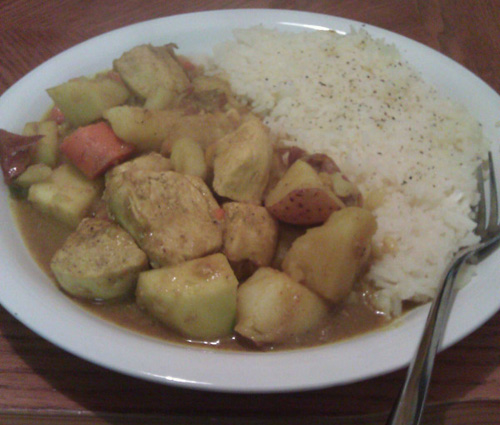 This curry was fabulous max!