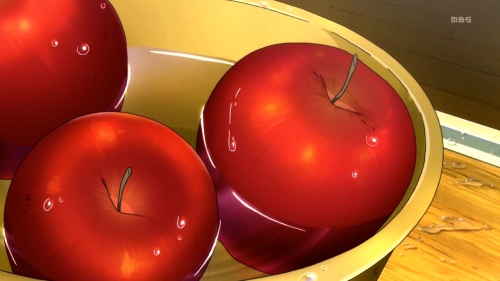 “You’re practically transparent. I can’t see you. I’ll share all of your punishment with you.”

ajthefourth: The above quote is taken from the second teaser trailer for Mawaru Penguindrum. Prior to this episode, I had seen it as a reference to the Child Broiler, the idea of invisible children, and this serial killer, reinforcing the idea of lost people in a somewhat restrictive society. This would also be in line with a few of the questions posed by Murakami’s Underground: The Tokyo Gas Attack and the Japanese Psyche (discussed further here and here): mainly, what exactly causes people like Aum Shinrikyo, or people like Kenzan Takakura and Penguinforce/Kiga, to enact the “survival strategies” that they do?

“Maybe they think about things a little too seriously. Perhaps there’s some pain they’re carrying around inside. They’re not good at making their feelings known to others and are somewhat troubled. They can’t find a suitable means to express themselves and bounce back and forth between feelings of pride and inadequacy. That might very well be me. It might be you.” 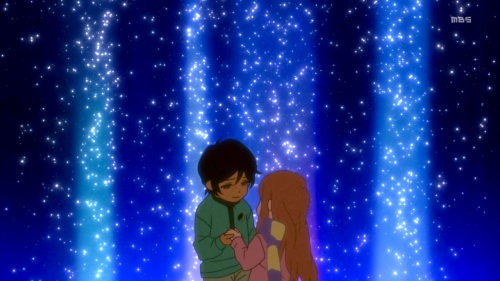 “Those two accepted their punishment. To live is punishment in itself.”

Himari’s words here, and in her conversation with Sanetoshi in his doctor’s office bring with them an even more interesting layer to the conversation. When about to be shredded in the Child Broiler, Himari remembers Shouma, and the fact that at least one person will remember her existence. This is what saves her from the Child Broiler (which I still see as a state of being), not Shouma riding in on a white horse, or leaping through conveyer belts of unwanted children crisscrossing an endlessly large incinerator to offer Himari an apple just as Tabuki’s rescue wasn’t Momoka bursting through a wall, saving Tabuki in grand, dramatic fashion. The saving of unwanted children occurs when one of them simply remembers that they are wanted, needed, or will at the very least be remembered by someone.

Prior to remembering Shouma and his friendship, Himari recalls that she lied to him when she said that she didn’t know the story of Adam, Eve, and the apple. Her interpretation is that Adam and Eve accepted their punishment; however, in Himari’s mind, the punishment is not a forced exile from paradise but instead, the fact that they had to go on living. This reflects an interesting twist on a commonly accepted interpretation of the fall of man, where part of God’s punishment is the fact that Adam and Eve will no longer be able to eat fruit from the Tree of Life, or be as close to God as they once had been, presumably giving them eternal life. Instead, they would have to work endlessly throughout their lives only to “return to dust” or die. In Himari’s mind, continuing to live is more of a punishment than death. The idea that Shouma is sharing his punishment with her could possibly mean his simple presence around her. After all, Himari accepts life, even if it’s entirety is a punishment, provided that she can spend it with Shouma. 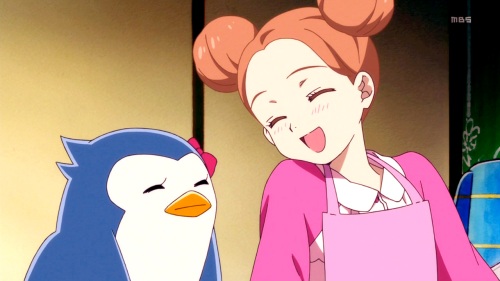 The wonders that the love of a family can do. The “girl who lived.”

vucubcaquix: There were interesting calls to the Child Broiler in this week’s episode. Several characters referred to it by name, including Himari, Shouma, and Kenzan, but I’m still not entirely convinced that it in itself is a discrete and concrete place. The key is in Kenzan’s language when describing it. He describes it as something akin to a “Frozen World”, that is language that Kenzan was using in the beginning of the episode to describe the state of the world and why Penguinforce needed to take action. It’s language steeped in metaphor: the accepted and the unaccepted; the Flame of Hope; Survival Strategy.  Like Emily, I too believe that the Child Broiler is more of a state of mind than a physical place and wrote as much explaining it and the connections to Albert Camus’ The Myth of Sisyphus in last week’s post.

This week a had a few visual indicators that I felt confirmed this. The Child Broiler, while not necessarily a uniformly physical place that disparate children can go to, definitely is a place that one can find themselves in if in a desperate enough situation. Anyone who is pushed hard enough, begins to wonder if living is really worth the effort. To go to the Child Broiler, is to signal that you really are about to give up on any tethers you may have had to the world. The administration that populates this Child Broiler that facilitates the grinding of children still resembles to me a representation of a mortal scenario. Whether self-inflicted, such as in a suicidal ideation, or through some external factor, like succumbing to hypothermia, the Child Broiler represents the death of children.

From the Latin nihil, meaning nothing, to annihilate is to make into nothing. The Child Broiler isn’t just the death of children, it’s their complete and utter annihilation. They’re there in this place knowing not only they they are about to die, but that they are doing so in a state in which no one will remember their existence in any capacity, because no one bothered to care. They were deselected and unchosen out of existence, as if there was no consequence to their being born in this world. They will become truly invisible entities, never given the chance to amount to anything. The only two characters we’ve seen enter into this were both saved by the exact same thing. 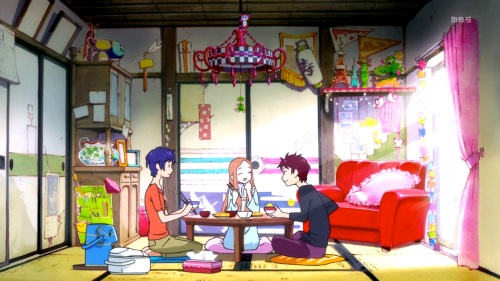 Color returns to the Takakura ‘family,’ if only for a brief moment.

ajthefourth: Much like in Episode 10, where we saw the Takakura children return to their respective established characterizations following the descent into Himari’s psyche and our introduction to Sanetoshi, we see a return to the opening of the series in this week’s episode, only with the knowledge that we now have regarding the Takakura parents; all seems calm until Shouma tells Himari that they are the only members of the Takakura family, breaking the spell of contentment over the scene. Kanba agrees, but obviously under duress, while Himari looks away. The important piece of this scene is actually what we bring to it as an audience. When watching that first scene in this ramshackle colorful house that seemed to be bursting out onto the very street it sat on, with two brothers caring for their ill sister, we never could have anticipated the events that had already happened (and were to happen) to this particular family unit. As an audience, the direction in this scene while paired with our own memories is what makes it alternately nostalgic and heartbreaking. We now bring to the table our innocence from the first episode as well as everything that has happened to our characters thus far, knowing that they can never go back to that ideal family unit again (if they ever could in the first place).

In addition to this nostalgia, the comparison of our own interpretation of the two scenes is a fantastic way to set up what we had potentially seen as an inevitable conflict growing between Shouma and Kanba due to their diverging personalities; they always appeared to be heading down different paths, and it’s apparent in Episode 20 more than ever, in spite of events two weeks ago with Tabuki where we seemingly saw the Takakura family strongly united. This past episode we see Kanba openly agree with Shouma regarding their parents (for Himari’s sake, no doubt) but inwardly disagree. This is reinforced by his overall attitude towards the end of the episode, where he reiterates to himself that he is the only one who can procure Himari’s medicine; he is the only one who can save Himari. Following Episode 18, we had (incorrectly, I’ve now come to believe) interpreted Kanba’s actions as self-sacrificial not only in Himari’s sake, but to save his brother from getting his hands dirty as well. Although that still may be part of it, knowing what we know from this episode, and Himari’s true feelings for Shouma, there may also be some lingering resentment towards Shouma that Kanba is housing, especially if he knows that it was Shouma who “saved” Himari initially. 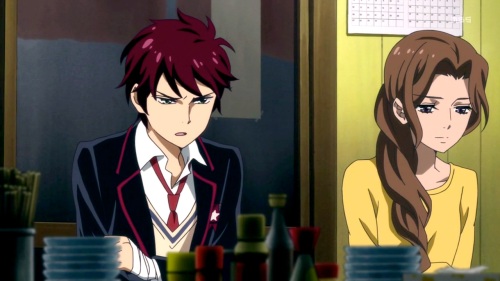 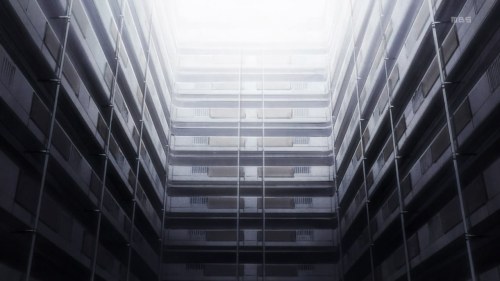 vucubcaquix: Kenzan spoke out in the beginning of the episode against the corruption of the world, sorting between those who are chosen and those who are unchosen. We spoke above about how being chosen and being remembered is the equivalent to being saved from abandonment, thus Kenzan and his organization style themselves as the advocates for the abandoned. With this in mind, I found the location that Penguinforce was holding it’s meetings in to be very interesting. It was by chance that I was reading an article in Cracked.com about supposedly haunted places, and I came across a section referencing a placed called Hashima.

Also known as Gunkanjima, Hashima is one of 505 uninhabited islands in the Nagasaki prefecture, and is regarded as a holy grail for urban decay. Given the very generic and nondescript facade of the building that Penguinforce used as their hideout, I would’ve thought the visual allusion to be tenuous at best. But the strong presence of the themes of abandonment in this episode make the connection a lot more tenable. The visual direction of the episode serves to reinforce that the terrorist group truly believes wholeheartedly that they are in the right and that they are the advocates for the abandoned in the “Frozen World”.

The fact that the setting of Penguinforce’s hideout lacks any discernible distinguishing features, works to its favor as it connotes a sense of anonymity, an invisibleness, that lends to the disposable nature of people in a corrupt world according to their beliefs. The irony I see in this however is that Hashima, with its nondescript and generic architecture falling into ruin after decades of abandonment, is a candidate to become a UNESCO World Heritage site, effectively making it so that it will never be forgotten in an official capacity.

Hey, maybe that’s the point after all, huh?