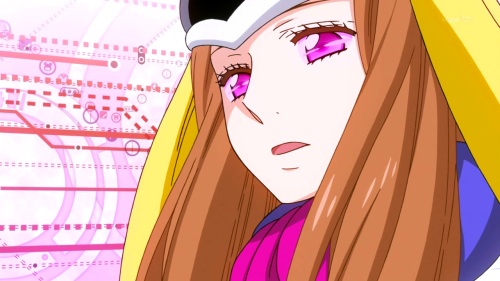 “I’ve had enough of listening to your bullshit you stupid bitch. Hurry and hand over your rotten, delusional ambition, this ‘Fate Diary’ to that dumbass.”

ajthefourth: In this latest post of Mawaru Penguindrum, much like this past week’s episode began, let us begin with a flashback. Recall in Episode Five when Shouma and Ringo get into a verbal, and physical, tussle over what was, at that time, Ringo’s “fate diary.” Shouma clumsily tries to procure it, Ringo wallops him, and Himari activates the Survival Strategy over the dinner table; after all, curry and survival strategies should be enjoyed with the ones you love, right?

The colorful quote above contains, following revelations regarding Sanetoshi and Momoka’s final encounter, quite possibly the first words that the Oginome sisters spoke directly to each other. This is followed immediately by Ringo’s disbelief and subsequent (amazingly awesome) climb up from out of the trapdoor in order to snatch the hat off of Himari’s head by force. To reiterate what I said in that episode, Ringo is a girl who acts.

"What's wrong with YOU? You perverted stalker slut." -The Princess of the Crystal to Ringo Oginome

Unfortunately, at this time in her life, Ringo was acting on a wrong intuition; the idea that her following absolutely everything that her deceased older sister had written in her diary would eventually bring her family back together. The Princess of the Crystal’s words are harsh in this episode (as they always are, if you remember in Episode 11 during the “big reveal” The Princess tells her to “Cry, monkey bitch.”) and for good reason. Ringo is hampering her own development by solidly living in the past, a past which belongs, not to herself, but to a sister who she has never met, and who everyone else deifies. This is The Princess’s (and Momoka’s) way of forcing Ringo to look at herself, and what she is sacrificing in the here and now in the name of carrying out a fate that doesn’t exist.

Yuri’s scene with Ringo in this week’s episode was especially poignant. It reminded me a bit of the badminton scene in Revolutionary Girl Utena; Yuri was making peace with her once-adversary Ringo, and validating the fact that Ringo is the one for whom the diary was left behind. I liked how Yuri phrases it that someday, Ringo will be able to use it to save someone she cares about, and that’s what Momoka would have wanted. I also loved Ringo’s response, that she never thought of “transferring fate.” 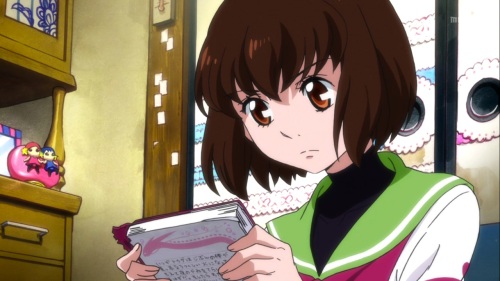 "You can have it back. I've finally realized that Momoka left behind it for you." -Yuri Tokikago

This points out one of Ringo’s more endearing qualities; even when she was forcing events in the diary to happen, she was forcing them of her own will. Yes, she acted in the name of destiny, using the diary as an end-all, be-all script to follow; however, she enacted these events forcibly through her own actions. Only twice did she seek magical help and one event was thwarted by Penguin No. 2 (Shouma), while the other led to the realization that she didn’t love Tabuki and had fallen in love with Shouma instead. The latter is the most important since the magical part of that plan turned out to be not so magical once it actually played out. In spite of eggchanted frogs and a fate diary in her past, Ringo is someone who has learned from her mistakes and is now thoroughly rooted in the present. I thought it was wonderful that she hadn’t thought of a magical solution like “transferring fate” to solve her problems. That’s right, Ringo, when it comes down to it the only person who can solve your problems is you.

Another possible interpretation of the hat that we could glean from this episode (and that I personally like) is that while Himari was watching her Shouma possibly drift further away from her, perhaps Momoka was watching her younger sister finally find love.

It’s a bit lovely and bittersweet, isn’t it?

vucubcaquix: We’re here. There is less than one week left where we can speculate to our hearts’ desires and the possibilities for our being right or wrong are limited only to the imagination with which we can apply to the direction of the plot. In a few days’ time, the canon will be set, the characters end their journey, the story will have been told. I’m going to take one last stab into the dark.

I’ve been paying a lot of attention to Kanba lately. His fall from grace has held my attention more than anything else, but I think I know why that is. We, the audience, are being set up for one last storytelling sleight-of-hand: Kanba has been working with Momoka the entire time.

Kanba’s descent into villainy has been quick and total, crossing moral event horizons by murdering police officers and openly allying himself with the man who is manipulating him. He states that he doesn’t care about the state of the world, and will actively destroy it, if it means a little more time with Himari. Something about that doesn’t ring true the more I think about it. Kanba’s desire above all else, is to be someone of use to the ones he loves. He will sacrifice, he will work, he will search, and he will take punishment, to help the ones he love. But will he willingly destroy? He’s been the source for a lot of unintentional grief because of his actions, but has he ever knowingly and intentionally caused grief for whom he loves? Other than his ex-girlfriends, that is.

I’ve been thinking about Tyler Childers’ comment about a character from a popular sci-fi franchise called Firefly. In the franchise’s movie, Serenity, there’s an antagonist named the Operative who commits atrocities in the name of Good. What sets him apart from other antagonists is that he recognizes that his actions can be considered, in a manner of speaking, “evil”. He works towards creating a new world, knowing full well that he’ll have no part in it because of what he’s done. The more I think about it, the more it may be the case that this could very well be describing Kanba and what he’s doing.

Think back to episode 17 during Penguindrum’s last Survival Strategy session. Shouma and Kanba ask the Princess of the Crystal point-blank, is the diary the penguindrum? She answers not by confirming or denying that fact, but by withholding more information from the both of them. For a moment, anyway. Once Shouma disappears, the Princess and Kanba once again appear to consummate the Survival Strategy session, and Kanba admits to her that he feels it can no longer be him. He can not be the one to save Himari. The Princess responds by saying that yes, she still believes that Kanba is capable of the task, and proceeds to tell him what exactly the penguindrum is. She tells Kanba and only Kanba. Not Shouma, and not the audience.

It’s important that Shouma not know for some reason. Information is being withheld not only from the audience, but from him as well. Shouma is completely blind to what’s occurring, and my theory is because it’d be easier to dupe Sanetoshi into trusting Kanba fully with less people knowing what the full plan is. Kanba’s actions in this episode lead me to believe this, despite taking on even more seemingly antagonistic aspects. He steals both halves of the diary, sets them on fire, and shoots Shouma at pointblank range. But, Kanba already knows that the diary is not the penguindrum at all, and that it may not even be necessary for the spell based on what the Princess told him. And yes, he shot Shouma, but he did not kill him despite having both the power, and the predilection towards more drastic measures. The spent casing we see on the floor of the hospital room is a penguin ball, and we know what those are capable of depending on the color. But the color of the penguinball ammunition is something that the audience doesn’t know. If it was red, then there was something that Kanba wanted Shouma to forget, possibly reinforcing the necessity for blindness to prevent some kind of bias from tainting Shouma’s actions. But if the spent ammunition was blue, like Masako’s in episode 19 when she assaulted Himari, then perhaps there was something that Kanba wanted Shouma to remember in order to inform these latest actions.

Shouma woke up on the floor of the hospital room, perhaps altered somehow by Kanba’s attack. When he comes to, the Princess of the Crystal is finally revealed to be Momoka all along, and she says to him that the penguindrum is waiting on the Destiny Express. She knew what the penguindrum is, she told Kanba what it was, and she’s telling Shouma where to find it. Kanba stands there, proclaiming that he’s waited for Shouma to show up, and there we end the episode.

If Kanba indeed has been a double agent for Momoka this entire time, what would that have accomplished? Was it precisely just to lull Sanetoshi into a false sense of security? Does this erase the sins that Kanba has committed supposedly in Momoka’s name? What if he isn’t successful? The blood of several people are now on his hands, and he’s committed acts that are irredeemable in many peoples’ eyes, including my own. Does he harbor no illusion about the state of his own soul and the possibility of not being able to participate in the world he may be trying to save? Will the price of the sin be erased if the memory of it also vanishes? Or does the act itself live on regardless of its perception?

Kanba desires above all to be of use to the ones he loves. If he takes on the Goddess’s punishment and ceases to be in a physical sense, will his scorpion’s soul continue to illuminate the night sky? The symbol of the depths he has plumbed after falling so far into the darkness, will it be brightness? Or nothing but ash? 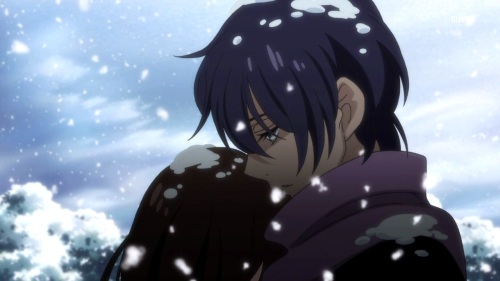 If we're being completely honest, our hope is for this end.