Nisemonogatari and the Arrow of Female Hysteria 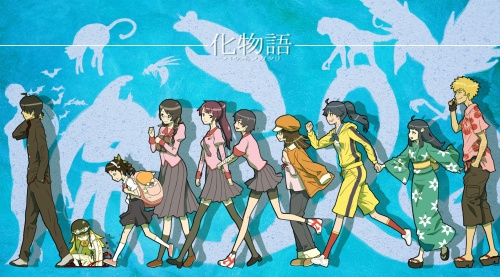 So. Nisemonogatari. Sure, you’ve got your Shinbo-tastic fanservice and your racy banter, but these traits really operate in the service of patriarchal cognitive bias. Yup. We’re going all Stroop Test on this one for my first outing at Altair & Vega.

I’d like to start by talking quickly about social justice approaches to cultural works. The easiest way to understand it is through the example of the FedEx arrow. See, there is an arrow in the FedEx logo. Some people can go their whole lives without seeing it or knowing it’s there (I actually was, until someone pointed it out), but once you see it, it cannot be unseen. This same logic applies to issues like gendered or racially aware analysis of art. Now that I’ve started to watch anime through the lens of feminism, I see its core issues everywhere and my plan is to bring you along for the ride. So? On to Nisemonogatari!

At its core, Nisemonogatari is a harem series, but it gets kudos, especially from the more thoughtful members of the blogosphere for its oblique characterization, which it achieves through the examination of what brought each girl in Araragi’s gang to her oddity. Nadeko’s budding maturity reflects in her constant come-ons to Araragi, Kanbaru indulges her perversion to reflect her dualistic nature, and Senjougahara’s violence reflects her past vulnerability: tsundere as emotional armor (that’s a common theme, see: Toradora!).

Even if the series wasn’t rampantly moé to an almost mercenary degree, the central conceit of the story works only because we as viewers are willing to take its female characters’ imperfections and vulnerabilities at face-value and still consider them sympathetic. Simply switch the genders of Araragi and his harem and it’s easy to see that the sexism doesn’t end at the fanservice. It is, as they say, turtles all the way down.

Nisemonogatari operates on the inherent vulnerability that we subscribe to female characters that comes from the central trope of women as passive or in need of protection. It’s the strange duality of “emotional, but repressed” that drives tsundere (a large part in creating Hitagi as a character is a mashup of her imperious coldness and her deep, helpless affection for Araragi), just as much as it creates the unabashedly shameless and cloying Kanbaru. Through this emotional vulnerability and inherent quirkiness Araragi both gets an opportunity to play rescuer and appear comparatively sane despite the strangeness of his own circumstances and habits.

Hitagi Senjougahara provides a good framework for understanding this duality. Despite her imperious nature and overt violence towards Araragi, she remains smitten with him, allowing him to do as he pleases despite the possible repercussions (her control over him is heavily lampshaded during both Suruga Monkey and Nadeko Snake). As viewers we swallow Hitagi’s act easily, at once in awe of her powerful tsun-tsun,  but capable of ignoring it when the situations call for it.

But what does this have to do with gender? And why the Stroop Test? Well, that is simple—assuming you’re willing to step through the door. The Stroop Test demonstrates that cognitive bias can be induced or is operating at all times. Some things, like the roles of man-as-rescuer and woman-as-damsel-in-distress have been so ingrained that when it forms the foundation for a work, we hardly notice—unless we’re looking. Nisio Isin is using our cognitive bias to sweep a small narrative problem under the rug: why, when surrounded by more capable and clever girls does he get to be the hero? Because he’s male. At every turn, the female cast members need Araragi’s help or are drawn to him for some reason or another; despite his minor ability and seemingly deplorable nature (the rest of the cast frequently picks on him), he is doubtlessly the hero of the show, as the only truly sane one among a group of girls we’re primed to see as hysterical or flighty.

Is this bad? I think yes, it is. See, you can describe a great deal of character inconsistency in this show through the old frat-house adage of “b**ches be crazy,” and if you find yourself in this place, the show’s characterization is failing you.

But where does this get us? What purpose does “seeing the arrow” have in this context, because, frankly, I may have just told you that your favorite show this season is complete shite? Well, feminist reading of anime can do a few things for you. First, you can learn the difference between actual, three-dimensional characters and ones who merely conform to your preconceived ideas of good characters (if you take some time to compare Hitagi to Taiga, for example, you’ll see that one is defined by her archetype while the other inhabits it as a consequence of her other character traits). But more importantly, when it appears an author knows what he’s doing, it can also lead you to completely change your understanding of a work. In Katanagatari, the main female protagonists, Togami and Hitei Hime don’t appear as inconsistent or wooden as the girls from Nisemonogatari. This leads to another interpretation of Bakemonogatari and its sequel. My reading is actually that the show and its prequel were not really about the women at all, or Isin would have taken more time to push them from their archetypes. Instead, I think it means the show is about Araragi at its core, despite its moé.

Instead of focusing your attention, then, on each girl’s arc and her unique problems, you should instead watch for the challenges Araragi faces each week. How each interaction shapes his sense of self as the “man of the show”. As this interpretation has a clear masculist bent, it’s a topic I may return to at a later date. Or, I’ll just abandon it to write about the awesomeness that is Chihaya. I do love Chihaya.

33 responses to “Nisemonogatari and the Arrow of Female Hysteria”