The Melancholy of Satoko Kiyuduki 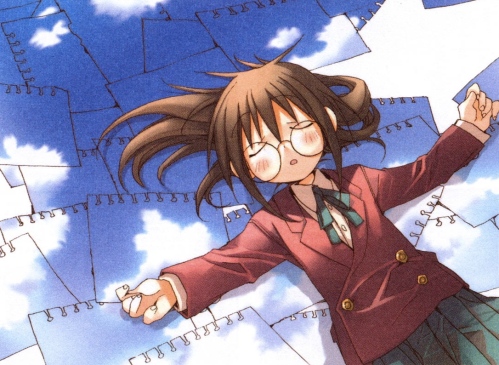 'Someday, I'd like to paint a picture that looks as if the sky has been cut out.'

The humble 4-koma: a style of manga featuring four panels aligned vertically; otherwise known as yonkoma or four panel manga. Most examples are found acting as a complement to series, an extra bonus awaiting those who acquire the bound volumes. Look no further than Hayate the Combat Butler, Genshiken, or The World God Only Knows for plentiful examples. They are also found in Japanese newspapers and magazines, akin to our own political cartoons. They are short, sweet, and relatively ubiquitous.

Yet, some manga use the format for the series itself. Again copious examples may be found, some of which have anime adaptations. Hidamari Sketch, K-On, Lucky Star, and the recently adapted Kill Me Baby, are just a few examples. All are generally light series, never straying too far from a slice of life and mostly including comedic elements. Indeed, the style itself is effectively defined by light, airy comedies.

Yet, there are always exceptions to a rule, and it is these exceptions that I find affecting.

By a curious turn of events, that I shan’t bother boring you with here, I was introduced to three series, all being of a distinctly artistic persuasion. These, as you can probably guess, are Hidamari Sketch, Sketchbook, and GA Geijutsuka Art Design Class.

After watching each series’ adaptations and finding them adorable, boring, and batty, respectively, I found myself hunting for the source for both the first and the last. Having acquired, and read them, they were as one would expect.

Yet, hidden in the final chapter of the third volume of GA Geijutsuka Art Design Class, henceforth referred to as GA to preserve sanity, we find the focus turning to a specific character. Miyabi Oomichi, known to her peers as Professor and Masa, is of the silent and mysterious kind. She is treated with respect by her peers, and is notably knowledgeable about her subject, but is not entirely above continuing a joke. It is also noted early on in the manga that she is engaged, of the arranged marriage kind. The chapter in question shows Oomichi acting slightly off.

Through a convenient twist we follow Kisaragi, effectively the main character, on a visit to Oomichi’s home. Here we find the traditional background one would expect of such a character, and an explanation of why she is not her usual self. Some have listed this as dislike for her arranged marriage; yet I find myself disagreeing with this simple reduction. As Kisaragi notes, Oomichi is by no means an unhappy girl. That she would paint such pictures of her fiancé’s shrine, I would argue her not entirely against it. Nervous about the steps she will soon be taking, perhaps, but certainly not an overt expression of dislike.

Whilst this scene is not melancholic, per se, it is at the very least affecting. We see beyond the obsidian shell of a character who is either a closed book, or simply one dimensional. It is not too far removed from the whimsicality and overt battiness the series wears with pride, yet, nevertheless strikes a different tone.

After reading the series, I did what any other would, and decided to take a look at other 4-koma series. One of these sampled manga was that of Satoko Kiyuduki’s Shoulder-a-Coffin Kuro. Being by the same author as GA, difficult to locate, and with only a few copies remaining on a certain online shop, I decided to take the plunge and bought both volumes. 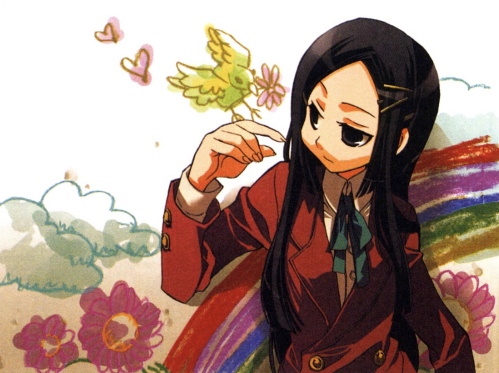 'From the first time I saw it I knew it wasn't going to survive. But I couldn't leave it alone. That's all.'

I could very easily wax lyrical on the presentation, style, and extensively coloured illustrations, but that is perhaps for another time. For now, I wish to focus on its plot.

Again, we find a relatively whimsical 4-koma, only this time with a fantasy setting. Centred about the eponymous traveller, Kuro, we follow her and her companions through a number of vignettes. Kuro’s tale, however, is much darker than that of GA’s. We find within her pages tales of curses, falsehoods, superstitions, disease, and death. Presented alongside prevalent themes of hope, innocence, and the minutiae of everyday life.

Painted with a light brush, the darker elements of Kuro are handled subtly, with neither meaning nor consequence forced upon the reader. The juxtaposition of whimsy and charm, found within 4-koma in general, alongside darker topics, makes for an affecting read.

Perhaps an example is in order?

Early on in the series we are introduced to the characters Nijuku and Sanju. Both are small children with unusual gifts, such as the ability to shapeshift, and to absorb and give colour to that which is around them. We learn that their father figure, known only as the Professor, has since passed on. Kuro finds the children locked in a cell in the basement of the Professor’s castle. Explaining the Professor’s demise to the innocent children is both revealing of the two main characters’ personalities, and a delicate moment to observe as the children fail to comprehend that they can no longer see their beloved Professor.

Adding to the sense of unease, we find that the Professor holds a reputation for research into the supernatural, that he met his demise in a less than peaceful manner, that his castle holds many cells and dungeons, and that the children’s names mean Twenty-Nine and Thirty respectively. Visions of a stylised Dr. Frankenstein rise unbidden in the mind. Well, in mine at the very least.

We go on to see a number of other events. We see that which leads to the death of an entire town. We are told the meaning behind Kuro’s somewhat apt name.  We are told bittersweet tales of love, and the final moments of a lonely old man reunited with his wife.

Satoko Kiyuduki may not write the most complex, or philosophical, works. Nor does she produce a gamut of popular, action-oriented titles. Yet Miss Kiyuduki has illustrated her ability to inject weight, and perhaps a little melancholy, into a genre that is not known for it. Perhaps she is not alone in doing this, but I would recommend Shoulder-a-Coffin Kuro to both old hands, and to those who have otherwise overlooked the genre for being what it often is. 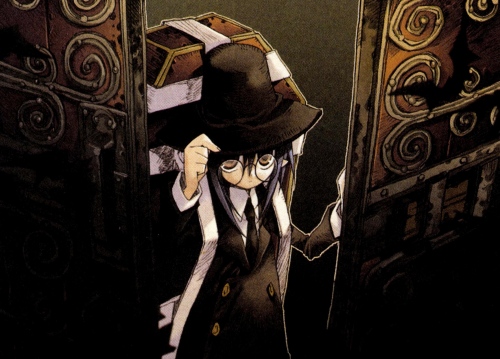 23 responses to “The Melancholy of Satoko Kiyuduki”