One night, bored and trawling the web for reading material, I landed a seinen romantic comedy that promised the addition of laser-beam-firing alien antics. A recently completed four volume series, so far 13 scanlated chapters of Ashita Dorobou exist in English. While those chapters deliver on the promised romantic shenanigans and alien antics, it is the relationship between the protagonist and his ex-girlfriend that sparked my curiousity, for in the very first chapter I noticed the resemblance to that newly-coined romantic trope, the Manic Pixie Dream Girl.

In Garden State, Braff plays Andrew Largeman, a detached young man suffering quarter-life malais, called home by his psychiatrist father to attend the funeral of his late mother. During a doctor’s visit he encounters Sam, a bubbly pathological liar with a fondness for The Shins. Large’s journey takes him from graveyards to mansions, hotel peepholes to stone quarries, and as he revisits the old friends and haunts of his childhood home town he reawakens to the value of life and its relationships. And the flighty Sam’s vivacious accompaniment contributes a spark to Largeman’s revitalization. A spark that, by the end of the film, he could no longer imagine living his life without. 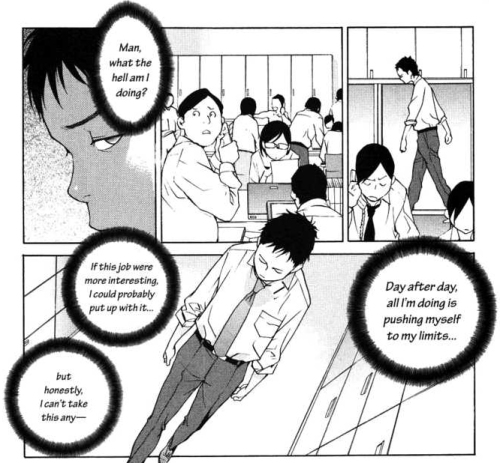 So, in what way did Ashita Dorobou trigger associations with Garden State and the Manic Pixie Dream Girl? You may’ve noticed in Garden State that there is another crucial ingredient to the Manic Pixie Dream Girl: a rudderless, melancholy lead in need of that effervescent catalyst. In Ashita Dorobou, we first see salaryman Kyouichi Miyasako reflecting on his past relationship with college sweetheart Ashita Tendou, half-asleep amid a strenuous work environment. Caught in slavish devotion to his occupation, Kyouichi recalls the child-like dream of his ex-girlfriend when a mysterious sphere disrupts both Tokyo air traffic and his remembrances, delivering Miyasako’s spark: Ashita Tendou, just as she appeared in his college memories.

At first, the combination of Kyouichi’s work-devoted rut and the dramatic appearance of college ex-girlfriend Ashita Tendou, whose existence represents child-like rejuvenation, seems to fit the MPDG bill; however, mangaka Masaya Hokazono throws a couple twists into the story. Ashita’s appearance and supernatural capabilities—such as shooting a beam of light at a disruptive helicopter—cast doubt on her identity. And in addition to the mysteries of the alien Ashita, at the end of the third chapter Hokazono introduces the real Ashita Tendou, a best-selling novelist coincidentally fixated on extraterrestrial existence. Her debut doubles the manga’s MPDG body count and promises a novel love triangle with the shallow entity who embodies Miyasako’s vision of Ashita’s college self.

As scanlations continue to develop I look forward to seeing the development of Ashita Dorobou’s relational triangle and the unveiling of the mystery surrounding alien Ashita. Will Hokazono subvert the Manic Pixie Dream Girl trope by developing his two eponymous characters, or will one or both, like Natalie Portman’s Sam, merely serve as a catalyst for Miyasako’s resurrection? While the latter would be a bit of a disappointment, Hokazono Masaya has captured my attention with an entertaining concept, and I am curious to see its promise fulfilled.