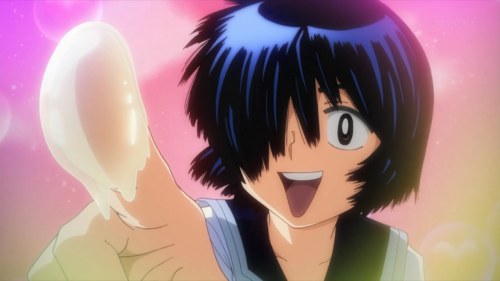 A taste of honey... tasting much sweeter than wine.

This week, we finally get to see Ayuko Oka in action! (And perhaps more importantly, hear Ryō Hirohashi play her!)

On a side note, I have rough translations of the short essays written by Riichi Ueshiba for the first four volumes of Mysterious Girlfriend X up on my personal site. They’re spoiler-free (by my definition, at least, which admittedly may differ from yours) and cover a broad range of topics, so if you’re interested in the series, do take a look!

Saliva tastes sweet. Well, no, not normally (if your saliva is sweet to the taste, it may warrant medical attention), but in the world of Mysterious Girlfriend X, it certainly does, if you have that special connection.

Sweetness is interesting: as one of three appetitive tastes (sourness and bitterness are aversive tastes, and are generally thought to have developed to help humans avoid sour and bitter compounds, such as poisons), it is a pleasant sensation. However, unlike saltiness or umami, we can handle sweetness in fairly large concentrations. It’s not unheard of for children to eat spoonfuls of pure sugar, but what about spoonfuls of table salt or MSG? (Well, MSG by itself doesn’t induce an umami taste…)

We also prefer sweetness much more as children than adults, in part a genetic preference that becomes more influenced by cultural factors as we grow older.

My point is, sweetness is a mysterious, almost primal sensation. By having Mikoto’s (and Ayuko’s) drool be sweet, Ueshiba not only recalls images of youth, but even those back from prehistoric times. Sweetness was once an indicator of life and health in a mysterious world full of danger, and it’s only fitting that it features so prominently in Mysterious Girlfriend X.

The most dramatic occurrence this episode can probably be summed up with a single screenshot: 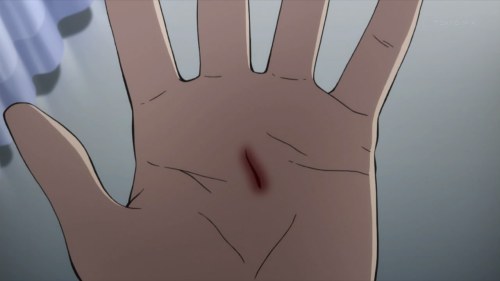 I winced at this scene.

So yeah! Mikoto cuts herself with a utility knife (that type of snap-off blade is a Japanese innovation dating back to 1956, by the way), gets Ayuko to taste her drool, and voilà: the same wound appears on Ayuko’s hand.

In Western thought, this brings to mind the Catholic idea of stigmata, marks appearing on the faithful that mirror the wounds borne by Jesus Christ during the Crucifixion. It’s not unthinkable that Ueshiba, with his knowledge on religion and the occult, meant this as an intentional reference.

Incidentally, the real-world phenomena of stigmata started in the thirteenth century, coinciding with the rise of increasingly graphic depictions of the Crucifixion in art, showing Jesus’s suffering. In this way, stigmata became a way for believers to empathize with Jesus by partaking in his pain.

So I posit that drool serves the same function in Mysterious Girlfriend X: we have mysterious, supernatural Mikoto, unknowable to the average outsider. But to those who are connected to her, like Tsubaki and Ayuko, drool becomes a way of knowing the unknowable, by experiencing her emotions and even her physical pain.

Of course, generalize this from just Mikoto to girls in general (by the author’s admission, the most mysterious of creatures to the boy in puberty), and we can see how Mysterious Girlfriend X becomes a teenage fantasy in more ways than one. To be able to understand what she’s thinking… I’m sure there’s a handful of teenage boys out there who would gladly taste some spit for that!

As a final tangent, while the idea of actual stigmata doesn’t show up in anime too often (does The Qwaser of Stigmata count?), the general concept shows up, in all places, giant robot shows. The pilot, although sitting safe in his or her cockpit (or as in Guilty Crown, entirely removed from the field of battle), is still connected to the robot by physical feedback, often taking damage in the corresponding part of the body where the robot is hit. Just an interesting connection, especially since Ueshiba acknowledges that the work was influenced by robot anime…

Tune in next week for first dates at the beach!