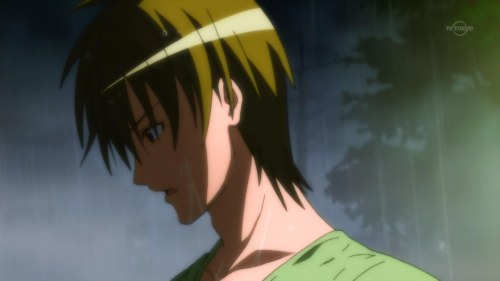 This episode was boring. Let’s talk about something else.

Like how boring Sunrise thought this episode was. The bulk of this episode’s source chapter was a bland, sappy, dramatic story you’ve seen a dozen times in shounen manga before. While the dramatic elements of the first episode were its weakest parts, that story was at least trivially engaging and believable. Suwano is established as a real character, and then implicated in drama. Keita and company are introduced solely as vessels for dramatic tension, so their hackneyed emotional struggles fall completely flat. Moreover, Ichiko’s sudden changes in behavior are much too rushed and much too convenient to serve as believable character growth.

Sunrise did their best to streamline and play down Keita’s storyline, and emphasized the amount of time allotted to the more gag-oriented first half. One assumes they couldn’t excise large chunks of the plot altogether, but trimming it down seems like a decent alternative. Throughout the episode, the rushed drama and regular supplements of original humor make it painfully apparent that Sunrise didn’t enjoy this much either.

The rearrangement of the manga’s plot appears to serve a similar purpose: the second and third chapters of the manga were adapted in reverse order. That is to say, Sunrise adapted a more slapstick-centric chapter for the second episode, in order to space out the dramatic moments and attempt to build some momentum. That momentum took a hit this week, but I doubt that all is lost. If nothing else the degree of contrition with which they approached this episode is encouraging.

The visual reference humor was back in full force this week, with one gag—a To Love-Ru: Darkness reference—which actually felt a bit inspired. That, a few quick sight gags, and a surprising concentration of well-executed defenestrations pretty much sum up what this week’s episode has to offer in terms of entertainment.

With the dearth of much in the way of physical humor to propel it forward, the animation in this episode languished as well. The majority of the episode consists of people sitting around arguing about family values or running around melodramatically in the rain, neither of which lends itself particularly well to any fun visuals. Even what minimal slapstick the episode has is relatively uninspired, visually speaking. There’s certainly none of the lively, detailed physical acting that was so crucial to the charm of the first two episodes.

Incidentally, to Sunrise’s credit, the recurring post-credits Nadeshiko ga! gag, which is original to the anime, finally earned a laugh this week. While so far it had been mildly charming in a “poor man’s Lucky Channel“ way, the short for this week actually included a constructed joke beyond the surface-level silliness of the premise itself.

Next week introduces a new character with a pretty entertaining gimmick, but there’s also more uninspired drama. We’ll see how it goes.