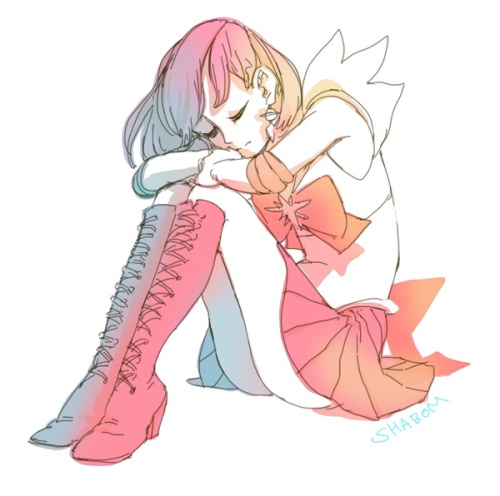 “I whispered aloud, ‘If only I could be Hotaru Tomoe, then I could destroy the world.'”

AJtheFourth: When one is confined to a specific space, a specific location, or has specific constraints put upon them, they tend to find progressively more creative outlets of expressing their emotions. Adolescence is but a flash in the pan; however, it weighs heavily on one who goes through it, effectively capturing them. While coming to terms with the various changes that adolescence can bring about, one tends to focus inward sometimes enveloping themselves in a fantasy.

Then, there are those times when the fantasy gets the better of one, and spills outward, projecting a persona that makes one feel instantly powerful and superior, hiding the fact that all the while, one may feel quite the opposite.

Confinement and constraint, in addition to the inability to do much of anything, neatly fueled my personal delusions of grandeur during junior high school. Although having “weak, underdeveloped lungs” sounds like a made-up anime illness, it unfortunately is not, and when I caught pneumonia in junior high, it was quite serious. However, being trapped in the house with precious little to do did have one large benefit: I could read to my heart’s content. Yes, perhaps I wouldn’t remember it, due to fevers and the like, but I could read uninterrupted for hours, and this had a major impact on my perspective at the time.

It was around this time that I discovered anime and manga. More specifically, I discovered Sailor Moon, and after just one episode, perfectly airing at 5:00AM to fit my haphazard sleep schedule, I was hooked. This was only amplified by my discovery of the internet, thanks to my parents purchase of a new computer and America Online.

Yet, it was not the bubbly titular heroine Usagi Tsukino who caught my attention, but the group of outer sailor scouts lead by Haruka Tenoh, Sailor Uranus. Most importantly, touted as the most powerful of them all, was Hotaru Tomoe, Sailor Saturn.

It’s a bit painful to realize that all of the reasons that drew me towards Hotaru were ultimately self-centered. She was sickly, isolated, and socially-awkward because of it. However, as Sailor Saturn, she held the power to destroy worlds with a single dip of her weapon. In my bedroom, with stacks of books tucked under my pillows and paints scattered everywhere, I painted watercolors of Hotaru. I found myself looking out at our tiny yard with the large red maple that obstructed my view of the street and wishing that I could become Hotaru. With my warm fingers pressed against the frost-patterned windowpane, I whispered aloud, “If only I could be Hotaru Tomoe, then I could destroy the world.”

To follow were fantasies where I would save my friends, and various one-sided love interests, with my destructive powers, always at the cost of my own life to keep them safe. It was all terribly, terribly tragic.

The dreams have faded; however, Hotaru Tomoe remains one of my favorite anime characters to this day.

A_Libellule: I am only really in touch with two people from my time at secondary school, them having tracked me down following my almost successful disappearance, with all the tenaciousness of a terrier. Even then, it is likely that neither of them can remember what I was like, back when I was but a lowly first year. This is probably a good thing; as I’m certain I was quite insufferable. Unlike our two leads in the series that spurred this post on however, I never really acted out my delusions of grandeur. I certainly daydreamed, but such thoughts never leaked out into the wild.

These daydreams were born of a great many books, most of which fall squarely into the science fiction and fantasy genres. From The Bartimaeus Trilogy, through His Dark Materials, to the works of Trudi Canavan, Terry Pratchett, and Neil Gaiman. These, and others such as The Old Kingdom series, helped fuel my overactive imagination. With my head in the clouds, I dreamed of nobility; of being a Lord, Earl, or Duke extraordinaire. Able to speak any language, a tongue as sharp as the blade at my belt, and, by way of Dune, oft ducal governor of a distant planet.

Today, and whilst I may still enjoy the two genres, I most certainly do not indulge in such childish fantasies. I watch Japanese Girl Cartoons instead, and I’m not entirely certain if that’s much of an improvement.

Blackholeheart: I remember the summer of my 8th grade year my cousin came to stay with us. He was a year younger than me but unlike me he was tall (I was a late bloomer), athletic, and lived in what I thought of as a big city.  He listened to cool music, had cool clothes, and it was of vital importance to me that he look up to me.

We had a municipal pool that he expressed interest in going to so of course I told him how I went there all the time and was a total pro at the high dive. Truth was, I’d never set foot in the place as going to the creek was free and I’m terrified of heights.

After a few days of this, judgment day arrived. We were headed to the pool. The first blow to my ego landed at the check-in desk. When I tried to pay the pool fee I found out they only took exact change. The clerk had to go to the concession stand to break my tenner. I told my cousin to go on in while I waited for my change.

Ego blow two came once I had my change and headed into the locker room. Here I spotted the pool rules sign, and being oh so bright, read it over so I would know the procedure and be able to look like an old pool hand. I could hear the showers running where presumably my cousin already was so I stowed my gear and stepped into the shower room. Stark naked. With five other guys. In their swimming trunks.

Blow the third was a knockout after that battering, figuratively and very nearly literally. My cousin kept wanting to see my diving board “expertise.” Finally screwing up my courage, I climbed up, walked the plank, and at the end bounced once, twice, and slipped. SPLAT. Belly first. Needless to say I was done swimming and done trying to be the big man in front of my cousin, but we did become fast friends.

Which is good because if we hadn’t, after witnessing all that I might have had to kill him.

8C: I had quite a few embarrassing “phases” in junior high, though only twice did my delusions escape into public view. Both involved public performance; both occurred in the same middle school gymnasium.

At the beginning of seventh grade, before I’d fully solidified my grasp on social niceties and spurred on by my much more enthusiastic cousin, I decided to run for student council president. My posters were probably awful, but those are truly lost to the sands of time. What isn’t is my memory of the elaborate skit I wrote for speech day – inspired by Yu-gi-oh. And acted out with the help of three of the six people I knew at the time and was able to convince to help me that morning.

Naturally, I lost. Luckily, everyone forgot about my campaign overnight. Unfortunately, I didn’t learn.

One does not care to ac(ry

Later that year was a talent show, which came along just as I was getting into competitive yo-yoing. If you’re not familiar, it’s even more ridiculous than it sounds. In my head, I choreographed an elaborate and stunning two-minute performance (scored by that one DDR song, Drop The Bomb! So awesome, right!). The day of, the CD didn’t work, my repertoire lasted about 30 seconds, and the seats were a good 50 feet away so nobody could see shit anyway.

And that was the last dream I ever had.

vucubcaquix: You ever get the sense at the end of the day, that if you had just said that one thing, or said that one snappy line at the right moment everything would have changed? Tsuritama, which aired this past spring, even made that a point in the protagonist’s character development. Yeah, I used to do that. Not to the degree that it was a reaction to some crippling social phobia, but I would replay entire conversations in my head as I lay in my bed at night or lathered the shampoo through my hair in the morning. I’d imagine what it would be like if I had changed one line, one word… How would that have altered the exchange?

Like, what if I had said something that fundamentally altered someone’s view of the world?

As I hurtled into puberty these thoughts would get bigger, bolder, more delusional. Mrs. Ascher, that’s not how you explain algebra to these clods. Ms. Stone, Columbus didn’t discover America, it was already here! Oh yeah, Henry? If the Bible says the world is 6,000 years old, how does that explain carbon dating? If the only way into Heaven is to accept Jesus, what about the billions of people before he lived or the millions of Native Americans before meeting Columbus?

No mincing words here, in my desire to become better and instill my words with power I became a little snot. In between believing myself superior and homing in on perceived hypocrisies, I forgot that rhetoric as a skill needed to be burnished as well. What I wanted, but didn’t quite know how to do, was to be able to move men’s souls using words as my clay. To use my medium of choice to illuminate the listener to another facet of this strange human condition we exist in. No one was better equipped to do this than I, as I alone had the means to convey the fundamental truths of the universe to the unsuspecting and uninitiated. The only thing I had to do, was speak!

I never grew out of these delusions, have I?