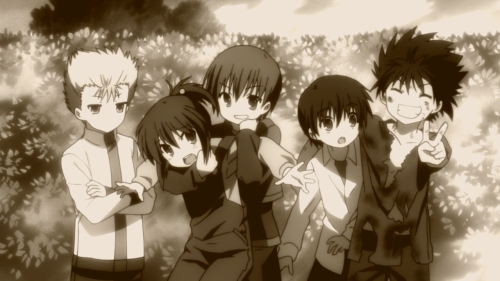 “We vanquish evil and deliver justice! They call us, ‘Little Busters!'”

ajthefourth: It is widely-documented in various media throughout the ages that we all do some rather questionable things in our youth. As testament to this, upon mentioning the childhood bee-vanquishing scene of our main characters’ to friends, no fewer than three separate stories cropped up of childhood attempts at antagonizing bees, and paying for it dearly afterwards. Only a child would think that they were fighting injustice by throwing rocks at a bee’s nest; however, as children, we tend to see everything with a grander scope than we do as adults. Once we are adults, we look back with sepia-tinged nostalgia, sometimes adding even more weight to situations than when we were young and living through them.

The same feeling can be applied, with distinctly less gravitas, to anime-viewing. Everyone has a story to share, and many of these stories revolve around the feeling that one receives when they remember, or rewatch, anime that they love. The Key series were some of the first I watched when returning to anime, and I watch them again on occasion for the warm, nostalgic feeling that envelopes me while I do. For this reason, I approached Little Busters with trepidation. Would I still love the similar style of narrative and storytelling years later, after my tastes had distinctly changed?

Oddly enough, that same feeling occurs when I watch Little Busters. Although I am unfamiliar with the story and characters, it already seems dog-eared like a favorite book, leaving both a warm and eerie feeling. The setup for the narrative is one that I recognize and have seen time and time again. The characters, all familiar archetypes, and yet, it’s a bit like returning to summer camp a year too late. All of your friends have moved on to more popular things, and you’re oddly suspended in time, attending the same programming, building the same campfires, and all of it seems a bit…off.

If there is to be hope for this series to succeed beyond expectations, it can certainly be found in the setup. There is one key difference (yes, mind the pun) between what Little Busters begins with and how other Key anime have begun: pre-established and close-knit friendships. By setting the scene with a group of already tight-knit friends, Little Busters has distanced itself a bit from its peers in that it has more to work with towards establishing interesting relationships. Instead of the bland, male, protagonist moving to a new town to go to school/find his mother, or only now beginning to find friends because he’s been a social pariah, our lead character is neither new nor unsocialized. And, although there are hints at his weak personality and isolated childhood, he has actual friends. This may sound like a minute difference, but it’s not as it opens up multiple facets with which these character archetypes can play off of each other. 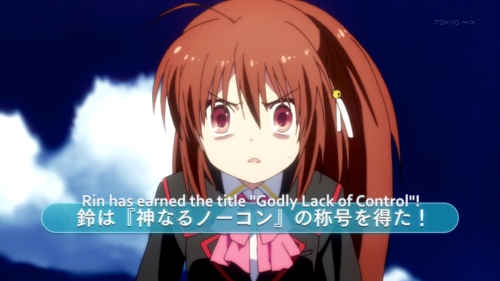 otou-san: I can conceivably see how, if you were a dedicated Key/Jun Maeda fan — or someone who played the game — then you would find the opening of Little Busters to be like stepping into a comfortable shoe. A shoe from the turn of the 21st century, a nice comfortable galge loafer that’s since been rendered outmoded by light novel adaptations.

Nothing about Little Busters is fresh and hip for the Late Imouto Era. A traditional Key visual novel setup these days seems almost quaint. But in these uncertain times, an uneasy otaku can be calmly pacified by the comfy blanket of a slightly out of date animation style, the glorious tresses of haremettes, and the sounds of traditional moe values (“oh-ho-ho” villainous ojousama laughter and the yelling of many bakas).

And then there are Maeda’s familiar hallmarks. There’s baseball. There’s a musical reference in the title that goes unacknowledged. There’s “humorous” violence in both the usual abuse-by-cute-girls fashion and kawaii-gangland schoolyard fights a la Clannad’s Tomoyo. It’s no Ikki Tousen (for reasons other than just the magically-modest lack of underpants), but you have to wonder about the unhinged anarchy in the school.

That comfortable “anime”-ness is steeped in so much passé stylization that it feels, to me, more like theatre than most anime. Opening episodes are great places to throw tons of money into sweeping cinematic statements with grand camera angles and soaring orchestral scores. Not here. Here we get economical animation and locations that resemble the sets in a play, each with their own background music that beeps and bloops on without regard for mood or pace of the current scene. I see the VN roots of this, and I get it. But it’s still awful. Again, though, I’m sure it provides that comfort for fans of the VN.

However, despite the comfortable setup there’s a glaring difference that AJtheFourth has already brought up, and which gives me some hope: Look at the cast. Already, the presence of at least two more males than even exist in the Clannad or Kanon worlds intrigues me. Obviously, the Buster Baseball team is going to get filled out with long-haired haremettes, but am I allowed to have some hope that this initial nod to a more realistic male-to-female ratio is a signifier of something… different in Little Busters?