otou-san: I feel like I really denied everyone the opportunity to witness me foaming at the mouth when it comes to last week’s Literary Bus (awful twitter joke ahoy). But as AJ4 mentioned last time, it turns out I do value the arrival of my firstborn slightly more than Key-shaming. Thanks to our guest Myst for holding down the fort.

As the cast of Little Busters! builds, so does my irritation. The arrival of new characters is always welcome in a harem setup, and an element of contrivance is to be expected just to make it happen. But honestly, I don’t think it’d be that difficult to pump a cast full of girls without resorting to “awful ojousama character just appears and forces herself upon Riki and the Busters while laughing.”

Kurugaya (cool guy? really?) in general helps me realize another point of discomfort with Key. See, there are so many shorthands, anime archetypes, and frankly just weirdly developed pseudo-characters in these stories that I find it hard to draw a line between what I see as intentionally fudging reality (remember that Key is fond of magical “realism”) and just plain shittiness. I could read Kurugaya as a brilliantly written character who’s smart on a surface level but has managed to fool herself into thinking she’s some self-important princess and is entitled to enraging affectations and behaviors: in a way, a form of chuunibyou. I actually like this interpretation. I could also read her as an empty pair of thigh-highs that pretends to be human by affecting a bunch of tired rich-girl mannerisms. Only time will tell — of course, most people in these games/shows are fronting in one way or another, even if they don’t know it[1], but I question the actual “depth” we’ll see from a character like hers. 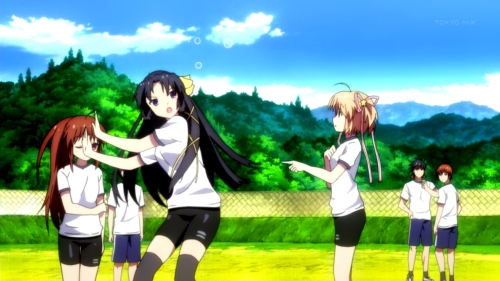 ajthefourth: Building upon what Otou refers to as pseudo-characters, in the first episode Little Busters! set itself from the other Key series of its ilk in establishing a group of childhood friends, both male and female, as the core character dynamic of the series. In our initial post, I had said that Little Busters would do well to continue this character dynamic. If it could focus on this throughout its run, it could end up  as not only a good Key series, but a solid character drama as well. Where in previous series the character interaction was always forced, especially at first, through the nature of a visual novel with multiple routes, Little Busters! had the chance to have genuine and nuanced character interaction.

Unfortunately, it has attempted to tread the path between this character interaction and shoehorning in the necessary leading ladies with dismal results. One longs for the genuine character interaction between the original group of friends that was found in episode one, which is nowhere to be found thanks to the new additions of Komari and Kurugaya. This is made glaringly obvious in the opening scenes of Episode Five, where the would-be baseball team is making an attempt at what one could only assume is supposed to be practice of their sport.

The deliberate interaction of Kurugaya and Komari not only rings falsely, but dilutes the more enjoyable dynamic of the original group, resulting in poor character interaction all around. This is also hindered by the fact that Komari, the first heroine in need of fixing, has a most child-like mental capacity, putting her on par with such first-route company as Makoto (Kanon), and Fuko (Clannad), neither of whom are known for their intellectual prowess. As to why these must be the first females to be addressed, one may never know.

[1]Let’s lock Maeda and his buddies in a room and tell them they can’t come out unless they’ve written a compelling story where every character can remember everything that ever happened to them in the past.