ajthefourth: Is this your first time visiting? Thanks for stopping by and don’t hesitate to voice your opinion.

As a blog, we are most distinctly known for ajthefourth and vucubcaquix‘s team blogging of Mawaru Penguindrum. Those analyses can be found here: https://altairandvega.wordpress.com/category/episodics/mawaru-penguindrum-episodics/ They are absolutely and 100% spoiler-filled, so tread with caution. If you want a few quick and dirty examples (quick being relative, the Episode One post is quite long) we highly suggest these posts for Episode One and an editorial on Episode Five.

Here are individual editorials by each of our authors for you to read and consider.

vucubcaquix: To write about our hobby is to express our devotion. These pieces of expression, rich with sentiment, have been etched into the internet through the efforts of their respective authors. They deserve recognition and to know that the efforts put into them were appreciated.

It takes a fanboy

I would say it takes a village, but seriously, how does a village of fanboys get anything done? Aw, hell, I wrote a book.

Rewatching Code Geass R2 set my mind working on something that has been gnawing at me for a while, and it’s only recently that the semblance of an answer began to take form. The part in question takes place towards the end of the season and is when the Emperor’s plan is revealed to Lelouch concerning the Mental Elevator, C’s world and the Sword of Akasha: that of unifying the world into a single, super consciousness. Depending upon the anime one has watched this will likely be a familiar concept and one that has underpinned many influential and subversive series.

The most obvious proponent of this concept is of course Evangelion which constructed elaborate systems based upon Jungian psychology, theology and science and implying that the next evolution of humanity isn’t as discrete individuals but as an amalgam. Without delving too deeply into the labyrinthine plot of the series and movies, End of Evangelion demonstrates this with everyone melting into a fluid, whereas the final episodes of the series give a fractured glimpse at the emotional montage Shinji suffers during this. Released in 1995-96, this was mostly the result of Hideaki Anno who it is anecdotally said spiralled into neuroses around the half-way point of the series which is coincidentally when it shed all pretences of being a fluffy children’s show and went full bore for dark and symbolic. Read the rest of this entry

The Role of OPs and EDs

After posting about some inappropriate EDs last week, I thought a bit more about the subject, specifically about what the hell we expect from OPs and EDs. And it probably isn’t a shocker to know that OPs in general have a fairly defined role (with leeway on execution), while EDs are a different story altogether.

Occult Academy, you’ve made a fan out of me.

The Anime Everyone is Talking About, the Latest Episode – Related Secondary Title

This sentence is a general indicator of my reaction towards the episode as a whole.  Some things happened here and there, but the overall impression that I got is that The Animation Studio Everyone is Talking About is totally on the ball this week.  The majority of the other blogs totally disagree with me, and even their respective comments are totally divided as well.  To not sound too divisive on the subject, I assure that my general indicator was felt by the majority of viewers, so that my taste in anime is very agreeable.

“It’s Harder to Raise Girls”: Magi Puella Madoka Magica and the Variances of a Mother

We only see her for a moment, but the daughter-less Junko Kaname is a far-cry from the fierce businesswoman we’ve come to know.

Eureka SeveN Gives Me a Big Moment to Remember Love By

I’ve been warned, and people can say they told me so. Well yeah, you told me so. Eureka SeveN is awesome. Every so often it will blow me away with a big moment. Episode 20 gave me a big one, but it’s this particular moment in the 26th that I had to pause the show to fight the tears. Continue reading → 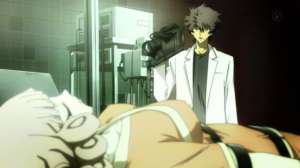 For a change Shiki resolves its previous episode cliffhanger and sticks with Toshio for the most part this week.  There are some truly chilling scenes in this weeks episode, if last weeks keyword was ‘bleak’, this weeks is ‘disturbing’.

To preface: I find it a delightful coincidence that this item would be next on my list just after I read from Pontifus:

I’ve always liked this project for its honesty — which is to say that it doesn’t ask us to value our favorite anime moments in terms of the somewhat disingenuous good/bad; it’s simply a celebration of what we like, and for these twelve days we needn’t feel the need to feign authoritativeness in the interest of defending ourselves.

Of course, shortly here I’ll feel the need to feign authoritativeness in the interest of defending myself; still the sentiment seems oddly appropriate.

This one is a little abstract: a few months back, ghostlightning kicked off a brief fad of bloggers evaluating their favorite characters and considering what that might say about them as fans, which I hopped in on happily. Of my own list of five, the first three—Hidamari Sketch‘s Miyako, Moyashimon‘s Yuuki Kei and Kodomo no Jikan‘s Kokonoe Rin—were easy picks I had long held in high regard; but I had to dig deeper to round out the last two—Toradora!‘s Kushieda Minori and Chu-Bra!!‘s Hayama Nayu.

Birth of a Goddess, Madoka’s Path to Nirvana – A Study of Buddhism 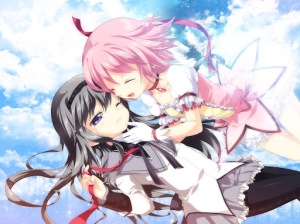 In the much anticipated final two episodes of Puella Magica Madoka Magica, the tragic timelines of the magical girls finally come to an end. On Walpurgisnacht, Madoka contracts Kyubey, and wishes to, with her own hands, erase all witches from existence before they are even born. With the miracle, she becomes a goddess-like existence —a force of nature outside our universe— who bends the known laws of the world across all times and timelines.

The parallels to Buddhist teachings are fascinating. In addition to the surface visual symbolisms and karmic language, the story embodies some very core ideas of Buddhism.

A Left-Handed Discourse; A Sinister Discussion 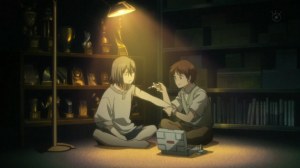 No.6 is an interesting enough show. It’s got some pretty good animation, a nice setting, all that jazz. But I can’t help but feel distanced from everything somehow; there’s just something… off about the main characters to me. Now, I don’t want any of ya’ll to think I’m a hater or anything – I completely support this sort of lifestyle choice – but I just don’t think I can relate to these characters. I mean, how do you expect me to relate to someone who is right-handed? 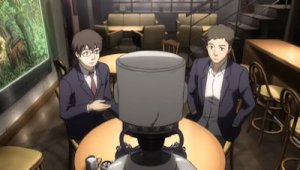 It’s been far, far too long since the last installment of EVE no Jikan (aka Time of EVE), but now episode four is here and quite frankly I jumped out of my seat in excitement at finally being able to watch and enjoy it. Boy, was it worth the wait though…

Another post inspired by a group viewing of an entire series, but this time prompted by a challenge to write about the one show I never actually thought I’d ever be able to write about. The series’ very nature had me lost for words for years: how the hell can I possibly put my thoughts on FLCL into one article? I can get around part of the challenge by leaving the character study segments for a second half, but even so…

The problem with FLCL is that it’s heavily reliant on the reaction of the viewer for its impact: when I try to rationalise the events and themes I worry that the essence of what it’s trying to say will be lost. My love for it can perhaps be explained by the fact that I marathoned all six episodes every time because quite honestly I don’t think you can appreciate it any other way: instead of getting bogged down in the details you have to throw yourself into the thick of it with a very, very open mind to appreciate its twisted genius. Even better still, take some friends and a few cold ‘uns for the ride.

Taishou Yakyuu Musume in a single picture: Cute and educational! (I think…)

Taishou Yakyuu Musume is pretty clearly a seinen work (by the publication the light novel ran in if nothing else) but its rather unusual time period of the Taishou era, a sort of transitory era between the Meiji and Shouwa (aka Hirohito) eras, sets it up to deal with historical issues not frequently directly tread by anime and its related indicia to my knowledge. This makes Taishou Yakyuu Musume an interesting period piece in a medium (or genre; I can never tell when it comes to anime) that does not normally tread historical ground unless it also involves samurai and/or ninja and/or people dying in large numbers. (I am positive that there are far more manga that do this, but historical manga of any kind, set within or without of Japan, seem to be a fairly rare beast, so feel free to yell at me and tell me how wrong I am, in this or in any other matter to be discussed henceforth in this post)

::::::WARNING::::: FOR THOSE INTENDING TO WATCH THE SERIES THERE ARE SPOILERS AHEAD. AND BOOB JOKES. LOTS OF THEM. Also, pretty men and blood.

The new Lupin III came bursting out of the gates which such force, I was left reeling from the impact of its images. It was a testament to the new ‘old style’ animation, with character designs by Takeshi Koike and the director Saya Yamamoto (check those staff credentials; X, Redline to name a few) it was set up to be a fascinating series from the moment it appeared.

The initial commentary about the new Lupin was thus: Lupin must be updated, particularly the role of Fujiko Mine who was an oft-maligned heroine in a series defined by it’s naughty perversions and slapstick humour. While still an adventure series it was less Indiana Jones and more James Bond with boobs. The new series Mine Fujiko to Iu Onna is an ambitious attempt to imbue more character development and interest into its long running characters.

But I won’t get into that here, what I will get into is how a relatively two dimensional character like Fujiko Mine has been transformed very cleverly into a gothic romantic heroine who is subverting all the tropes. Because the new Lupin isn’t just for men and boys any more and despite the prevelant presence of boobs and ass, there is something beautiful happening in this series. It pains me to hear people call it sexist, when there is so much more complexity. And I hope over the three parts of this exploration, I can convince you to take another look at it too.

Enough! Before I lose my shit and everything with a penis is lit on fire. The proof is in the pudding.