Ouma Shu with a Thousand Faces: Guilty Crown and the Hero’s Journey 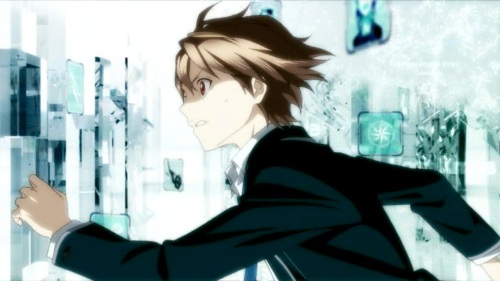 "Wait, you mean, I-I'm the protagonist?"

Guilty Crown has taken a lot of criticism since it began airing for falling into the trap of having beautiful production values, but a hollow story at its core. It has made the series highly entertaining to watch, although perhaps not in the same way as the creators had intended, since most of the entertainment comes from unintentional hilarity when the series decides to take itself seriously. This was none so apparent as in Episode 12 of Guilty Crown, where the series attempts to pull off a tried and true storytelling device and fails miserably.

The basic story of Guilty Crown boils down to the very simple monomyth, or Hero’s Journey, as described in Joseph Campbell’s The Hero with One Thousand Faces. When progressing through the 17 stages one by one, Guilty Crown is shown to be following them rather fastidiously. 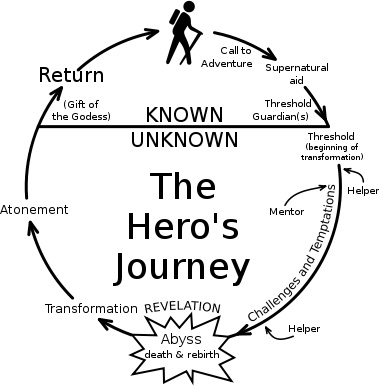 Call to Adventure: In the first episode, not-so-coincidentally titled “Genesis,” normal teenage boy Ouma Shu’s life is inevitably turned upside-down by the arrival of Inori who has stolen the formula for the mysterious Void Genome. Shu ends up with the power of the Void Genome and his world is forever changed.

Refusal of the Call: This is dragged out for quite some time as Shu flip flops back and forth whether he should join Tsutsugami Gai’s organization Funeral Parlor or not.

Supernatural Aid: A portion of the supernatural aid that Shu is given is within the power of the Void Genome that is bestowed on him from the beginning. However, this aid can also come, and usually does, in the form of a mentor, who may or may not be supernatural. In Guilty Crown this mentor or guide is Gai.

The Crossing of the First Threshold: This occurs when Shu faces conflict with classmate Yahiro and his infected brother, Jun. He kills Jun at Jun’s own request, but is immediately unable to deal with the consequences. However, this also marks the point of no return for Shu. He is now on the journey proper, and has already begun his transformation.

The Belly of the Whale: Shu wallows in self-pity long enough to get yelled at by Ayase, a gun pointed as his head by Gai, and slapped by Hare (all three instances well-deserved). When Shu pulls himself out of his self-loathing, he is finally able to, as Campbell says, “The hero, instead of conquering or conciliating the power of the threshold, is swallowed into the unknown and would appear to have died. This popular motif gives emphasis to the lesson that the passage of the threshold is a form of self-annihilation. Instead of passing outward, beyond the confines of the visible world, the hero goes inward, to be born again.” Shu has now completely separated himself from his previous life and is ready to undergo a metamorphosis.

The Road of Trials: This is where Shu currently is. There have also been glimpses or allusions to other elements of this Challenges and Temptations phase, such as The Meeting with the Goddess (Shu’s developing relationship with Inori) and Woman as Temptress (with recent revelations involving Shu’s sister, Mana).

The main problem with Guilty Crown isn’t because it adheres to this cycle, some of the most well-known and beloved stories follow this storytelling method strictly and are very successful because of it: the original Star Wars Trilogy, varying tales of Arthurian Legend, The Lord of the Rings Trilogy, innumerable Greek and Roman myths as well as Judeo-Christian, Buddhist, and Islamic texts. Unfortunately, Guilty Crown is lacking something that all of these other stories possess, compelling and interesting characters, especially when the protagonist is concerned.

In Episode 12, Guilty Crown attempts to take on another important (but not always necessary) component of the Hero’s Journey that often occurs within the Road of Trials: The Death of the Mentor, by killing off Tsutsugami Gai. In order for the protagonist to truly undergo a metamorphosis or transformation, they first must shed their reliance on those who have helped them journey to their current point. Often this means that the mentor character is killed off, and their sudden non-presence as well as the protagonist’s anger over their death will spur the hero on to greater feats. A good example of this is in the aforementioned Star Wars Trilogy when Luke Skywalker witnesses the death of his mentor, Obi-Wan Kenobi, at the hands of Darth Vader. Obi-Wan’s parting words encapsulate the entire purpose of the Death of the Mentor: “You can’t win, Darth. If you strike me down, I shall become more powerful than you can possibly imagine.”

Another interesting example of the Death of the Mentor scene is the way it is subverted in Eureka Seven with the relationship between Renton Thurston and his grandfather, Axel Thurston. (Although, one could argue that Eureka Seven does follow through on the proper Death of the Mentor, with the character of Charles Beams.) Upon receiving the Call to Adventure, Renton had told his grandfather that his travels would be an extended training, with the promise that Renton would return to Axel and become a full-fledged mechanic. Shortly after the mid-point of the series, Axel is tasked with creating a new piece of equipment, a giant surf board, for the robot that Renton pilots. Before he can safely deliver the equipment to Renton, Axel is attacked by the military and performs a series of risky maneuvers to ensure that the board reaches Renton, nearly dying in the process. Throughout the entire episode the signs of Axel’s impending death are all there, beginning with a local girl voicing the feeling that she’ll never see Axel again, and building up to the point where I was screaming at the television, “Don’t die, Jii-chan!” when his car drives off of a cliff. In spite of all of the seemingly obvious buildup, Axel survives, and more miraculously, his survival does not feel forced in the slightest because the series has done such a fantastic job developing and presenting his character, as well as the character of Renton, the protagonist. 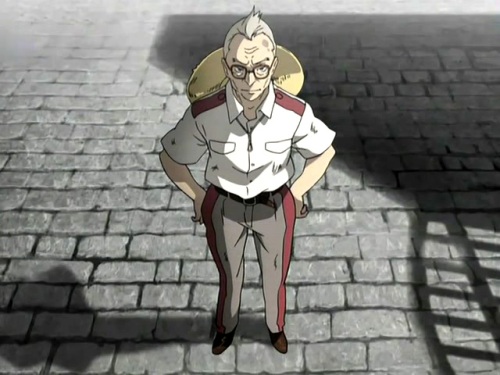 Going back to Guilty Crown, Gai’s death is about as dramatic as you can get. Not only does he pass on in order for Shu to regain his lost confidence and transform within his journey, but Shu literally stabs Gai in the back in order to attack his own sister who is apparently the cause of the majority of what is wrong in the world of Guilty Crown. If that sounds like a lot to take in during the course of one episode, it’s because it is. If it sounds ham-fisted how Shu kills off his own mentor (in spite of the fact that Gai was going to die regardless) it’s because it is. It’s not hard to follow or understand, but certain plot elements that are introduced appear with little to no buildup, while others have been telegraphed from the very first episode so that, upon their dramatic revelation, the audience can only sigh (and possibly laugh, if the show is taking itself particularly seriously at that moment). Guilty Crown has none of the subtlety that it needs when developing its relationships that even its adherence to such a tried and true formula as the Hero’s Journey can’t save it.

Which is why my personal reaction to Gai’s death wasn’t one of tears or sorrow, but a slight chuckle at the sight of Shu and Inori crying at the end of this episode. If Guilty Crown continues to meticulously follow the monomyth, I can’t wait to see how the Woman as Temptress (Mana’s saga) ends up playing out, followed by the inevitable Atonement with the Father (which has also seemingly been hinted at since the beginning of the series).

The best Guilty Crown post I have had the pleasure of reading, courtesy of Draggle.

42 responses to “Ouma Shu with a Thousand Faces: Guilty Crown and the Hero’s Journey”