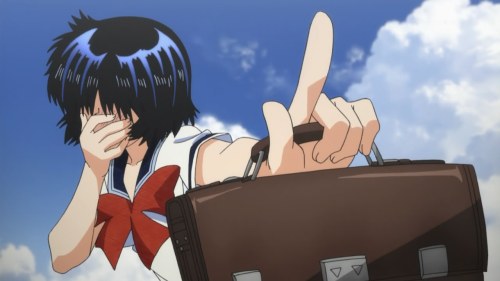 Listen, do you want to know a secret? Do you promise not to tell?

It’s the weekend, and you know what that means: more mysterious goodness! This week, we finally learn the significance of those scissors tucked under Mikoto’s skirt, and get an eyeful of fanservice along with it. All in all, episode 2 does a great job of establishing what I think will be important themes as the show progresses.

If anything, though, I’m a bit concerned about the pacing of the series. How much will they be able to cover in a single 13-episode cours? Episode 1 covered the double-length one-shot (chapter 0), and so I was expecting episode 2 to cover roughly two episodes’ worth of material. However, the anime has been top-notch so far, so I’m not too worried.

That aside, let’s move on to this week’s topics:

This week, we’re finally treated to the opening theme of the show, “Love Orchestra” (Koi no Orchestra). What really stands out, though, is the accompanying animation, with its recurring imagery of… lemons?

Although there are a handful of characters named Lemon (sometimes written as Remon, as it were), the fruit itself doesn’t show up much in anime. The only other example in recent memory is the Haruhi limited edition boxsets in Japan, which featured the characters holding lemons (a reference to a Japanese magazine, The Television, which does the same for their covers).

But I think the most plausible explanation for the show’s use of lemons comes from a Japanese saying (now a bit of an outdated cliché) which says that “your first kiss tastes like lemons.” In this episode, Akira is obsessed with firsts, from holding hands to having sex with Mikoto for the first time. With this in mind, the lemon may just be the perfect symbol of the bittersweet first pangs of love.

There are a lot of fictional brands that show up in this week’s episode. For starters, there’s this:

So what’s the deal with Tuesday Cola? The name and logo are references to Rinko Mishima, who shows up in both Ueshiba’s Discommunication: Seireihen and Yume Tsukai (“Dream Casters“). One of the nine Dream Casters, her design is based on Anpanman‘s Dokinchan, reflected in her super-deformed representation, shown on the soda can.

But why Tuesday? As a member of the Dream Casters, Rinko is designated as kayōbi, which translates to Mangala, one of the nine heavenly bodies of Hindu astrology, the Navagraha (which each Dream Caster is named after). Mangala is the Hindu equivalent of the Roman Mars, and both are associated in their respective mythologies with Tuesday, or dies Martis in Latin. Even the word “Tuesday,” named after the Norse god Týr, has syncretic ties to back to Mars. The connection is much clearer in Japanese, where the words for “Mangala,” “Mars,” and “Tuesday” all share the same character for fire, 火 (which can be seen on the can). Not coincidentally, in Seireihen, Rinko has a matchbox tied to her leg under her skirt (sound familiar?), and her “boyfriend” is a flame spirit.

And all of this is just scratching the surface: from Science Boy and Magic Girl to the ubiquitous one-eyed Bad Cat, the world of Mysterious Girlfriend X is rife with references, and not just to Riichi Ueshiba’s older works. Keep your eyes peeled, and you might just be rewarded for your vigilance!