Believe it or not, anime has a lot in common with rock and roll. They both inspire great fandom, huge arguments, and sometimes brilliance that transcends pop culture into the realm of something more universally accepted as “art.” But perhaps the purest forms of both media revel in the lowbrow, the seedy, the less-than-distinguished. That is to say: a loud, primitive, vintage-sounding rock and roll record by Guitar Wolf or Billy Childish may not be high art, and neither is Kono Naka ni Hitori, Imouto ga Iru!, but they’re both fun and your parents hate them.

Somewhere between the early stomp of Eddie Cochran and the insipid horndoggery of Nickelback lies the 70s. And therein lies a metagenre deified by many a radio station across the United States and held in similar reverence by Jojo’s Bizarre Adventure. I’m talking about Classic Rock.

There are plenty of kinds of classic rock, many of them terrible, although some are downright listenable. All are fair game for these characters of the “Phantom Blood” arc. I’ve included a bevy of YouTube links for your edification (and sometimes pain).

These guys are probably obvious, even to a 12-year-old Belieber. The thieving magpies of the heavy metal world, Led Zeppelin angered critics, lifted tour-mates’ songs, and fish-fucked underage groupies around the world. And the kids loved ‘em. I suppose their appropriating ways are more appropriate nowadays, in the postmodern world of sampling and mashups, but one can only speculate what figure they paid to Jake Holmes earlier this year when they presumably hush-hush settled out of court. Like the original Zeppelin, the undead quartet of Bonham, Plant, Page, and Jones want to steal your life force. 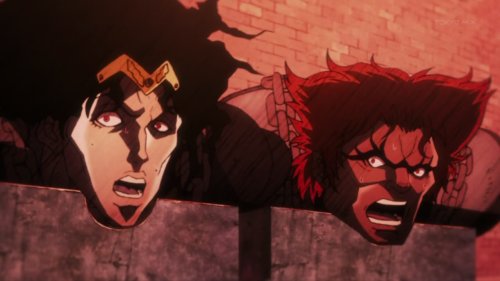 If you’ve ever heard prog-rock dissed in public by a cool-guy journalist or a punk rocker, chances are you heard of the scapegoat called Emerson, Lake, and Palmer. ELP were a supergroup of sorts made up of Keith Emerson from The Nice, Carl Palmer of Atomic Rooster, and Greg Lake, singer on the first and awesomest King Crimson album. You can trust me that these were all mad decent bands, but something happened when they got together that even HR Giger art couldn’t fix. They’re known now as the ultimate in bombastic pomposity, musicianship for its own sake, and extreme musical complexity matched only by extreme lyrical inanity. Tarkus, their second album, is considered a high sewage mark in the progressive rock world.

Bruford, the noble hair-demon-knight who bestows upon Jojo the gifts of Luck and Pluck, is named after another luminary of the prog-rock world that will already be familiar to Jojo fans: Bill Bruford of Yes‘s classic lineup. Yes gets less of my ire because while singer Jon Anderson was a helium-sucking glass-breaker and guitarist Steve Howe went on to form Asia, they did manage to incorporate a listenable amount of pop into their songs, and sometimes even remembered the “rock” half of “progressive rock.” Their signature hit “Roundabout,” with its weird beats and raging bassline, makes a pretty satisfying end to Jojo every week.

It’s hard to define “corporate rock,” as it’s really just a disparaging term, but it’s usually thrown at bands who fit into “AOR (album oriented rock).” AOR is a product of American FM radio in the 1970s, and bands associated with the radio format are likewise commercially appealing, blindingly white, over-produced, light-rock yawns. In the postmodern age, many of us have come to accept that Journey’s “Don’t Stop Believin’” is in fact a rock anthem regardless of how many Dead Kennedys records you own, while others of us have a harder time accepting it. Many corporate rockers were successful enough to transition into the 80s. But most people under 50 can still agree that REO Speedwagon suck beyond words.

Buffalo Springfield were an ok band. Not fantastic. But out of it came Steven Stills, who’d form the supergroup Crosby Stills and Nash, and Neil Young, who is Neil Young (nuff said). Unfortunately, the group also birthed Jim Messina, responsible for foisting two awful things upon this world: one, Loggins and Messina, meaning there’s a direct line to the danger zone from him, and two, Poco. These lame and easygoing LA country rockers probably helped inspire the Eagles too, and for that their young Jojo namesake probably deserves a tortuous death at the hands of ZA WARUDO. Enjoy this video of waterfalls and shit playing over the soft harmonies and bland hooks of their massive ’79 stinker “Crazy Love.”

The Doobie Brothers (original name: Pud) have, over the course of their long career, flirted with a wide range of shitty rock styles, including country-fried shit, somewhat-hard shit, white soul shit, and straightforward shit. No wonder a guy with a bag over his head who gets beaten by a Ripple in approximately 12 seconds is their legacy. The Doobies were defined by their fluid membership, so they might produce mellow awfulness like “Listen to the Music,” or essentially Michael McDonald solo excrement like the falsetto-fest “What a Fool Believes.” I’ll stop there, because you’ll be praying for Jojo to come whip a Sunlight Yellow Overdrive straight into your ear canal if you make it all the way through every Doobies hit on YouTube.

This is something that listening to too much Poco and Doobies has left you in, no doubt. But while the band Dire Straits is sort of bland and very dadlike, I can’t say they’re too offensive, and at least their sound is rooted in real hardworking bar rock. And really, they have a few things going for them. Their debut single “Sultans of Swing” has some inspirational guitar slinging by leader Mark Knopfler. His impressive solos are melodic, skilled, clean, and played with his fingers. “Money for Nothing,” which cleverly made fun of both the MTV hair bands and the old men who derided them (and had one of the first computer-aided videos), was great fodder for Weird Al. And of course, Mark Knopfler wrote and played the soundtrack to nerd monument film The Princess Bride. So while Dire and Straits may have bitten the dust rather quickly, they were as marginally respectable as their namesakes.

Since the best I’ve managed so far here is “marginally respectable,” I couldn’t leave without paying tribute to the man on the silver mountain, that is Ronnie James Dio — a man who shares half of our villain’s name with screen legend Marlon Brando. Though his stature was famously small, the late Dio had a massive voice, one of the best in not just heavy metal but rock in general. After doing some basic 50s teen pop (he was quite a bit older than most of his contemporaries), RJD started with a weak hard rock outfit called Elf. The band kinda sucked, but helped him get recruited into Deep Purple offshoot Ritchie Blackmore’s Rainbow. He left in the late 70s, probably due to Blackmore’s enormous ego, to replace noted human pharmacy Ozzy Osbourne in Black Sabbath. He enabled the band to transition into the 80s and become relevant again, before leaving to do a series of solo albums featuring rainbows, demons, swords, dragons, and other role-playing props. If you hadn’t noticed, I’m a fan. An even bigger fan than I am of Dio Brando as voiced magnificently and fabulously by Takehito Koyasu.

Future arcs of Jojo also feature musical names prominently. Whether or not I cover them in as much detail as this will probably depend on interest and my fortitude. I’m already watching Little Busters every week, do you really expect me to watch Doobie Brothers videos too?