Today’s Slogan: The Role of Double H in Mawaru Penguindrum, Episodes Seven through 12 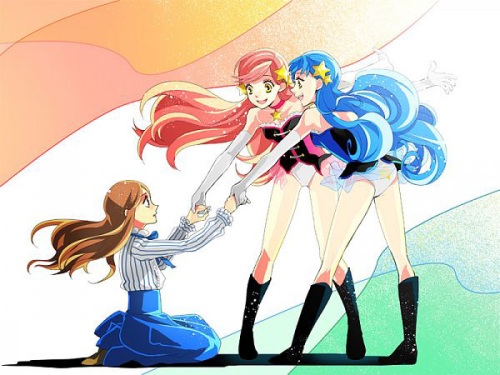 Like Himari, sometimes we need a little help figuring things out. That's where Double H comes in! source: zerochan

This next series of episodes, specifically Episode Nine, mark a tonal shift in Mawaru Penguindrum‘s presentation. Much of this is owed to the closing of Ringo’s story arc. As we discover just exactly what Ringo’s been up to, it leads us into a whole other universe of speculation and conflict involving the Takakura and Oginome family pasts, and a certain horrific event in Japanese history. 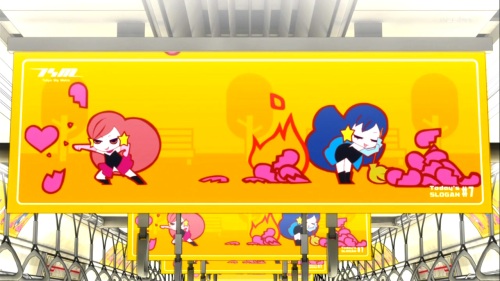 Episode Seven: “Know when to give up.”– This episode gives us a Ringo who is growing more desperate and delusional by the day. She is able to cling to the diary as proof that she will take her sister’s place and make Tabuki “her fated one” as well as delude herself into writing Yuri off as a harmless entity. That is, until Tabuki and Yuri announce their engagement. Knowing when to give up would mean that Ringo would be abandoning Project M, and the idea that she can become her sister in order to save her family, which is something that her character will be willing to do in the not-so-distant future, but not quite yet; instead, we see her descent into near-madness. Not-so-coincidentally, this is where we really start to see Shouma and Ringo’s relationship develop, with Shouma tailing Ringo to obtain the diary turning into genuine concern for her (or her mental state at the very least). It’s in this episode where we see him going to such lengths like creeping underneath Tabuki’s house with her, and allowing an enchanted frog to lay eggs on his body. Knowing when to give up also involves Ringo realizing that she’s in love with Shouma, after all. 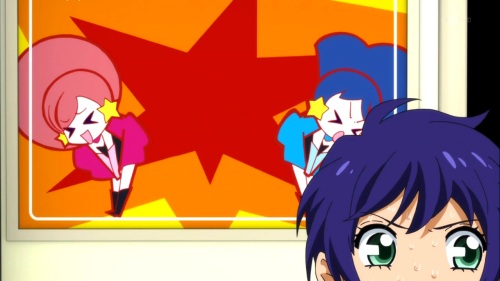 Episode Eight: “Noise makers not allowed.”– Upon further inspection this could (like “Stop ‘physicurry’ odor” in Episode Three) be another allusion to the subway attacks, which were initially misreported as an explosion at Tsukiji Station on the Naka-meguro bound Hibiya Line train (which was also the train with the largest amount of fatalities out of all four sarin drops). It also references Shouma’s fear that Ringo has completely gone off the deep end and is carrying a bomb on the train in order to kill herself and Tabuki as part of Project M. In a more irreverent manner, it could be referencing the idea of Project M as Project Maternity with Ringo’s attempt to drug and have sex with Tabuki (as sexual intercourse is often noisy). 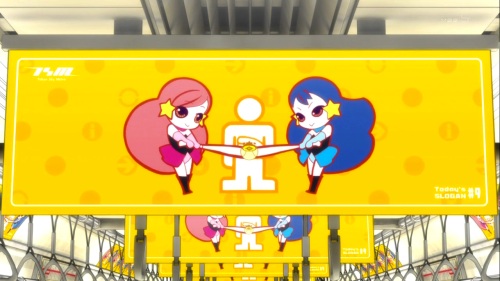 "Out of the park home run! Don't give up on your dreams! Dream hit!"

Episode Nine: “Out of the park home run! Don’t give up on your dreams! Dream hit!”– This slogan openly mocks not only Himari, but the entire cast of Penguindrum up until this point. Out of our lead cast, knowing what we know about them now, how many people have been able to follow their dreams? Himari was unable to fulfill her dream of being an idol, seemingly because the punishment enacted on the Takakura family due to their involvement in the terrorist attacks meant Himari falling ill and eventually dying. The Takakura brothers themselves rail against fate and both seem to be spinning their wheels (Kanba has already started his descent into the remnants of the terrorist organization and Shouma is still wallowing in self pity). Ringo’s dreams are misguided and delusional, never mind the fact that she’s not advancing very far on the seducing Tabuki front. When we inspect our periphery characters Yuri, Tabuki, and even Masako, knowing what we know about them now, none of them are fulfilling their dreams wholeheartedly either. Every cast member who was directly affected by the subway attacks is still reeling from the subsequent aftermath and the effect that it had on them, their family, or both. No one who was touched by the attacks is “okay.” 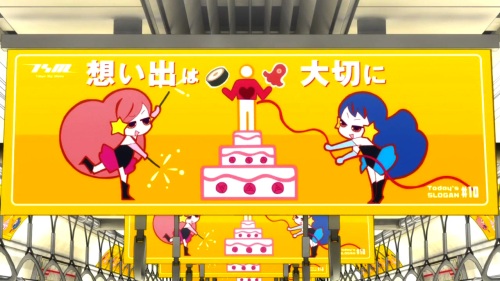 Episode 10: “Cherish your memories.”– Masako’s machinations come into a clearer focus in this episode as she toys with Kanba in the hospital. On the surface, Masako is goading Kanba, throwing previous relationships and romantic experiences back into his face, with the implication that he should have at least respected a girl’s feelings. This slogan takes on a darker meaning upon the examination of how the main cast treats their memories. For the majority of our players, they don’t cherish their memories as much as they cling to them out of desperation. They live in the past and are unable to move forward with their lives because of it. This episode also marks the first step in Ringo’s paradigm shift, where she truly will begin to cherish her memories as her own instead of being chained to her sister’s past. 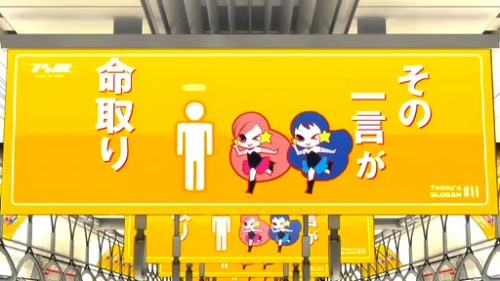 "Those words changed everything."

Episode 11: “Those words changed everything.”– Ah, Episode 11. This was the episode that sent everyone into a frenzy because of its deliberate and direct reference to the 1995 Tokyo Subway Attacks in the closing moments of the episode. “Those words changed everything,” in that we, as an audience, now knew exactly what we had only been able to glean and speculate from episodes prior. Mawaru Penguindrum‘s version of this event also casts its long shadow between Ringo and Shouma, hampering their budding friendship and potential romantic relationship. There are actually many other instances that also could have been “the words that changed everything” including Shouma telling Ringo that she is herself and no one else when she is still insisting that she is to become her sister Momoka. Ringo then makes her last misguided attempt at seducing Tabuki, only to realize moments before “the deed” would have been done that she can’t do it. Yuri then brings everything into perspective with a few words of her own; to paraphrase, that Ringo is in love with Shouma, not Tabuki. Ringo counters with a few words that change everything herself, by admitting that she was born on the same day that her sister died, a victim of the terrorist attacks.

As an aside, I’d like to direct everyone over to the translator 8thsin’s blog, since he added an interesting aside that the translation also could have also been “were fatal” in place of “changed everything” giving the entire scene an even darker twist. If the saying is meant to be taken as “Those words were fatal” then what is this placard implying about how the event will affect our characters’ lives? Or how Shouma’s words will affect Ringo’s life and vice versa? 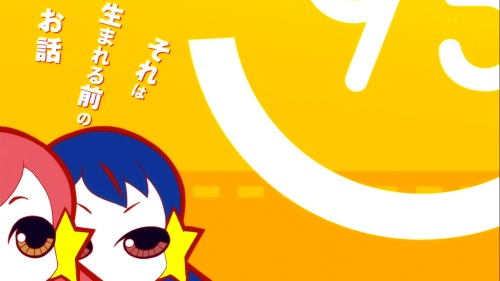 "That happened before I was born."

Episode 12: “That happened before I was born.”– This is a common excuse for not knowing something in the past, be it a historical event or a popular Saturday morning cartoon. With the two Double H girls eying the 95, they are again, directly referencing the terrorist attacks, playing innocent since the attacks happened before they were born. It’s a bit of a dig at Himari, since this entire episode involves Shouma telling an allegory of how Himari’s life was taken as a punishment for a taboo that their father had broken. The attacks were orchestrated by Himari’s parents, so even though they happened before she was born, she’ll seemingly never escape her punishment. This slogan mocks Shouma and Kanba as well since, presumably, one of them was the baby boy whose arrival into the world was the catalyst for initiating the attacks. It also mocks Ringo, whose entire life has been dedicated to living the life of her sister who died before, or just as, Ringo was born.

Lastly, it seems to be a bit of a warning to the viewer not to ignore things that have happened in the past, but instead, to investigate them and learn from them. Up until this point, the series has only shown characters unable to move out from underneath the shadow that their (or their respective families’) pasts have cast over their lives. The opposite, saying that something happened before you were born and therefore doesn’t apply to you or doesn’t deserve to be looked at with a keener eye is an equally disastrous worldview; this idea is obliquely given a nod through the various Murakami works that the series appears to be referencing.

It’s easy to see how Ikuhara’s choice to focus on characters who have, in their world, been affected by the equivalent of the 1995 Tokyo Subway Attacks affects the overall messages of Double H as well as the audience’s perspective on the series as a whole. At first, it builds from the introductory six episodes, and continues to obliquely reference the event until the end of Episode 11 makes no mistake about what Ikuhara is choosing to reference. The specter of the attacks overshadows every event, every character machination, and every character relationship in the series.

In case you missed it, here’s Part One, which covers episodes 1-6!

11 responses to “Today’s Slogan: The Role of Double H in Mawaru Penguindrum, Episodes Seven through 12”