“As it turns out, living was a punishment.
I’ve been punished in small doses living as a Takakura.
…But, still, we were together.
We took all the punishments, no matter how small and trivial.
They’re all precious memories.
Because the only reason I felt alive was because you two were there.”

What is true happiness?

"Shouma. I have obtained true light!"

ajthefourth: Supposedly, this is the question that Kenji Miyazawa set out to answer when he wrote Night on the Galactic Railroad, after a long train ride he took following his beloved sister’s death. For as much as Night on the Galactic Railroad is a story about getting over someone’s death, and living on without wallowing in sorrow, it is also a story that celebrates life and people. As Giovanni journeys on the mysterious Milky Way Train with his deceased only friend, Campanella, he learns not only to live on following Campanella’s death but possibly a way to live as well: by getting to know other people.

Himari Takakura said as a child that living was the punishment. She repeats it here while being torn to pieces by glass shards, which we had previously seen as a representation of the remains of abandoned and isolated children who were crushed in the Child Broiler. There are things that cut into people every day as they live because, yes, sometimes living is hard. However, something that makes it less hard and far more bearable is the love of other people. In a way, the line, “I’ll share all of your punishment with you.” really meant, “I’ll share my life with you.” The latter has a far more positive connotation than the former, but essentially they mean the same thing. Sharing the punishment of living means easing that person’s pain in order to make living bearable again. People may not realize this, perhaps because there is extra weight attached to the idea of “sharing someone’s burden” or “easing their pain” to the point where one might think that they would have to perform some grand gesture, but they do this every day by the simple act of getting to know other people.

If I’m repeating myself a bit, it’s only because this is where Mawaru Penguindrum shone brilliantly for me personally. It’s a very simple concept, getting to know others, with far reaching implications. All of the other things in the series: the lofty philosophical concepts that my blogging partner so adores, allusions to religion (Christianity and Buddhism for the most part), use of literature, use of fairy tales, and the bold decision to set the stage against a specter like the 1995 Tokyo Sarin Gas Attacks were pointing to this one overarching simple message. How do you prevent invisible children? Get to know them and tell them that they are loved. How can you prevent a tragedy like the gas attacks from happening again? Learn about what makes people feel as isolated as they do. As Haruki Murakami says near the end of Underground, most of the people who join cults are not disadvantaged or crazy, and actually quite intelligent people who raise the same philosophical, religious, and existential questions that each and every one of us do. Murakami even laments the fact that it’s precisely the people who are introspective and have the potential to be the most critical of a stagnant society that end up resorting to such violent methods.

“But at the same time, who would ever think, ‘I’m an unimportant little person and if I end up a cog in society’s system, gradually worn down until I die, hey- that’s okay.’? More or less, all of us want the answers to the reasons why we’re living on this earth, and why we die and disappear. We shouldn’t criticize a sincere attempt to find answers. Still, this is precisely the point where a kind of fatal mistake can be made. The layers of reality begin to be distorted. The place that was promised, you realize, has changed into something different from what you’re looking for.”

"Even if fate steals everything from them, the loved children will definitely find happiness."

If one listens to Mawaru Penguindrum, or to Night on the Galactic Railroad, true happiness is found in loving other people. Cliché, simple, but no less powerful or meaningful for being so.

vucubcaquix: It’s here. It’s done. Effusive praise aside, I honestly haven’t been this swept up in an anime in many years. Penguindrum relies on certain narrative techniques to such a degree and frequency and to varying degrees of success that the final product appears to be a bewildering incoherent mess to anyone who hasn’t paid an encyclopedic (read: obsessive) amount of attention to the smallest details of plot and characterization. But, despite my attention span’s notorious absence in most everything I apply myself to, Penguindrum was something that had me rapt.

In our first colloquium, I had made the bold proclamation that the narrative thrust of the story was going to be centered on the conflict between existentialism vs. determinism, or fate vs. free will. I will admit that I was a bit off the mark. However, the musings on existentialism were not in vain. These past two episodes had Sanetoshi revealing the impetus to his actions.

Alienation describes how a person can feel disconnected and dissatisfied with society, and informs a lot of the angst that one feels between the responsibility to themselves and their principles, and to others. Sanetoshi is an embodiment of this angst, or more aptly, an embodiment of the anger that one feels if the dissonance between the self and the other is too high.

Jean-Paul Sartre wrote a famous play in which he examined the nature of human interactions. The Existentialists have all thought and written about the fundamental isolation that indivudual people feel from both each other and the world at large, and Sartre posited that the individual person has an innate desire to reach out to each other to bridge this isolation. But in getting to know the “Other”, our self-consciousness has a “masochistic desire” to be limited. After all, hell is other people.

Sanetoshi’s reaction to this walling off of the self to others was one of frustration and anger. His solution to it is the metaphorical and literal destruction of the self which entails the destruction of the world as well. There is no greater unifier in the grand human scope of all things than death, and Sanetoshi believes that fully. 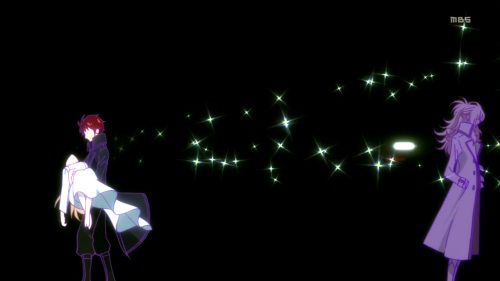 "As I could not, residents of the boxes like you could never gain anything. You will all simply disappear without leaving anything behind in this world."

But what else can possibly bridge this divide and pierce the isolation that one feels from the other? Greater minds than I have tackled this question using the brunt of their time alive as collateral, though I humbly suggest Søren Kierkegaard’s approach. To achieve what he calls “selfhood”, one must have a purpose that defines for us the meaning of our lives. A type of objectivity is necessary for this, but neither is one motivated enough to find meaning in life through pure objectivity. No, Kierkegaard believes that what one needs in addition to that sense of objectivity is a sense of passion, desire, and commitment.

What can be more passionate than reaching out to express the love you feel for an “Other”? This is strong enough to imbue a person’s life with meaning, to inform the direction of the arc of their life, to pierce through the box that is the self. This is integral to an existential tenet that one must supply their own meaning to life, since there is none inherently provided.

To love one another is a way to traverse the chasm that is the isolation we feel from others. Penguindrum through its sometimes convoluted storytelling and use of symbolism and metaphor is a story of a few lonely individuals seeking each other out in an uncaring universe. Their reach for each other staves off the hunger and thirst we all feel when we’re isolated from each other when we are in the boxes known as the self. And the connections they make are enough to ease the burden that is living, as my partner eloquently states, and strong enough to alter fate. Each and every little connection we make alters the fates of those around us, and they in turn alter ours.

vucubcaquix: If I can be a touch sentimental here, I just want to quickly thank the readers and commenters who came to us every week and indulged in our ridiculous ramblings and pushed back on us to make sure that we clarified how we felt. I don’t consider myself a disciplined writer, but through the little connections that I’ve made in the digital ether I’ve found the motivation to press forward every week. I’m a person who is rather keen on the idea of people coming together, even if only to exchange thoughts and ideas on trivial matters like anime, but the small connections that I feel from each and every one of you is no less important than any other. How fortunate it is that Penguindrum, the first show I was able to write about from beginning to end, has at its core the very themes within it that I am very invested in in my life.